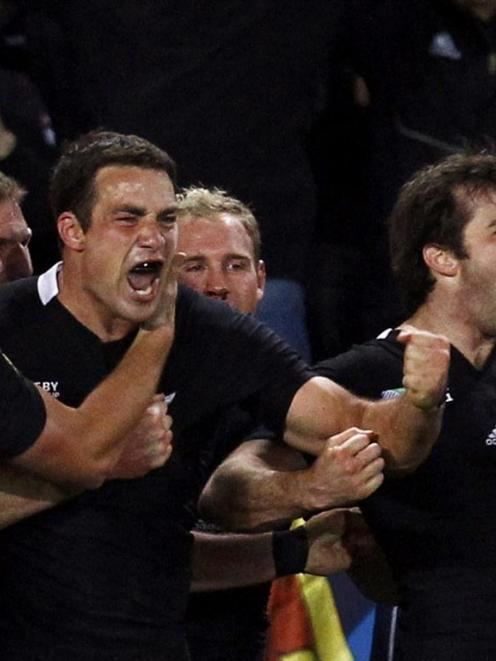 All Blacks (from left) Israel Dagg, Richard Kahui and Conrad Smith celebrate their World Cup semifinal win over the Wallabies in Auckland. REUTERS/David Gray
Too big, too strong and, most of all, just too damn clinical. The All Blacks beat the Wallabies 20-6 in the World Cup semifinal last night, and showed they have the muscle and grunt to go with the renowned finesse in the side.

This was a game to remember for any New Zealander.

Accuracy, strength and, most of all, a marvellous attitude paved the way to victory.

By the end the Australians were a rabble.

They were trying things from everywhere but they could have played to midnight next Tuesday and still not scored a try.

The hunger and desire from the home side was just too great to combat and the All Black front eight totally won the forward exchange.

It was strong in the scrum and won the critical penalty with nine minutes to go when it buckled the Wallabies scrum.

Out the back, the home side attackers were dangerous early on but tended to go into their shell the further the game went on.

Right at the death the Wallabies attacked the All Black line but just could not breach an All Black team which just refused to give in.

The home side's defence was a wall in the second half, a wall that simply appeared to have more solid foundations than the Great Wall of China.

With a minute left the crowd started celebrating and there was no shame in that.

It was that good of a display.

The home side had answered all the doubters and will go in a lightning-hot favourite in next week's game against the French.

The second half had just the two penalties from Piri Weepu but the Wallabies never got a sniff and were simply outgunned.

It was hard to pick out any All Black over another but blindside flanker Jerome Kaino was as good as ever, lock Brad Thorn immense and captain Richie McCaw top-notch.

Out the back, Aaron Cruden did little wrong and Israel Dagg showed his quality throughout.

The Wallabies were disappointing although halfback Will Genia tried hard and loose forward Rocky Elsom was all over the park.

First five-eighth Quade Cooper had a game to forget.

The Wallabies made a woeful start, with Cooper putting the ball out on the full from the kick-off.

The All Blacks immediately swung on to attack and went close a couple of times but could not get over the line.

But on the five- minute mark the All Blacks rumbled it up and then the ball got into the hands of the electric Dagg.

He broke past Elsom and then, just in the nick of time as he was forced out, he passed to Ma'a Nonu who scored what turned out to be the only try of the game.

Weepu missed the conversion from out wide but it was the dream start from the home side.

It could have got better four minutes later when the Wallabies went off their feet at the breakdown.

Weepu hit the post with the penalty attempt but he had another chance two minutes later in about the same spot and did not make the same mistake.

The Wallabies, though, are too good a side to stay out of the game for long and, after Weepu failed to find the touch with a clearing kick, winger Digby Ioane ran it back to almost the tryline.

The All Blacks managed to hold their line but conceded a penalty and James O'Connor kicked the easy goal from in front to put his side on the board with 15 minutes gone.

Then something strange happened.

The All Blacks set the ball up in the middle of the field, it went back to Cruden and he calmly dropped a goal from 38m out, midway through the first half.

Cooper then got in on the dropped goal act, doubling his side's score after 32 minutes.

Weepu though had the final say in the half, knocking over, just, a penalty from 40m out.

The All Blacks had all the territory in the first half and the lion's share of possession and, truth be told, should have been further ahead at the break.