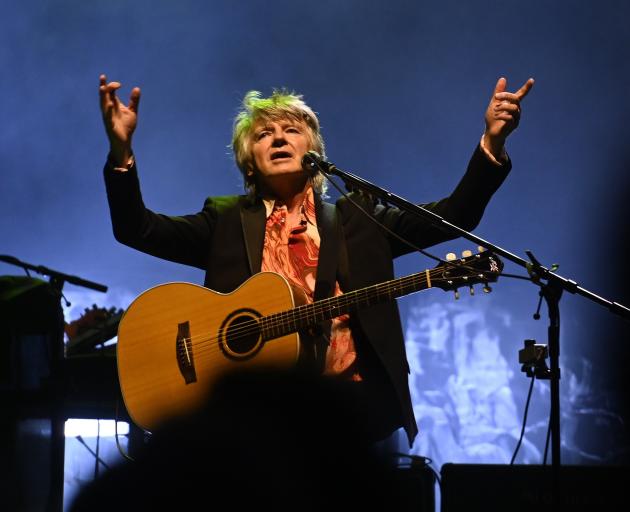 Neil Finn performs with Crowded House at the Dunedin Town Hall last month. Events are a bright spot for the Southern economy. Photo: Linda Robertson.
Overall activity in Otago and Southland’s manufacturing sector in March notched up its highest level of activity in the past year, the latest Performance of Manufacturing index shows.

The PMI reading for the region was 66.1 points; a reading above 50 indicates manufacturing is generally expanding, below 50 that it is declining.

There had been a "perfect storm" for manufacturers with the continuing issues with shipping and logistics, Otago Southland Employers Association chief executive Virginia Nicholls said.

Businesses were not able to fill all orders while they waited for stock and manufacturers continued to hold more stock while inventory was sitting in ships on the water. There were also extra freight costs and difficulties finding suitable staff, Mrs Nicholls said.

There were continuing issues getting staff through the border and trying to get essential business travellers back to New Zealand with certainty through MIQ was "harder than it should be", she said.

The construction industry continued to have strong growth. Machinery and equipment manufacturers were finding there were not as many large contracts available.

In contrast, the Performance of Service index for March was 39.6 points, which was similar to the previous month. The sector had been in decline for four of the past five months.

Tourism operators continued to struggle outside the school holidays, which was further stifled by the move in Auckland to Covid-19 Alert Level 3 at the end of February, and the lack of international tourists.

They were looking forward to the transtasman bubble reopening although it would not be easy gearing up for more tourists in a short time, and there were concerns there would not be enough staff, she said.

Large events continued to be crucial including University of Otago graduation, the Wanaka A and P Show and Crowded House playing in Queenstown and Dunedin.

There continued to be concerns around the shortage of labour in the horticulture sector.

Nationally, the BNZ-Business NZ PSI for March was 52.4 points, which was up 2.7 points from February and the strongest result since July.