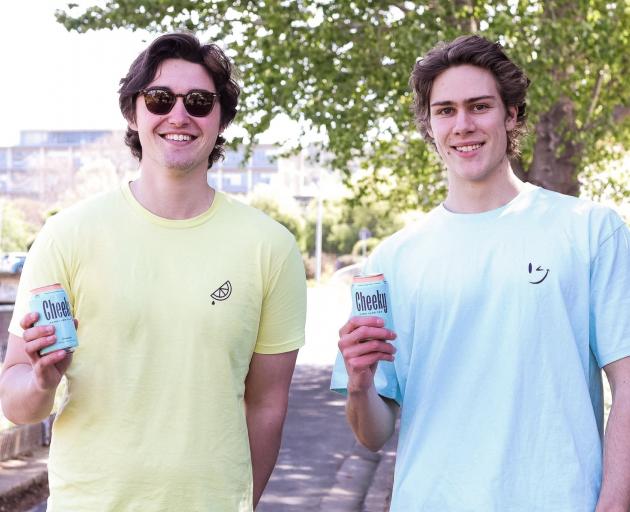 Cheeky Hard Iced Tea co-founders Brendan Yielder (left) and Olivier Despatis with their alcoholic iced tea. PHOTO: SUPPLIED
"It is kind of like taking the training wheels off — it is the real deal now."

Cheeky Hard Iced Tea co-founder Brendan Yielder is excited about the next stage of growth of his business.

The 24-year-old co-founded the alcoholic beverage business with friend and university classmate Olivier Despatis (21) while they were taking part in Startup Dunedin’s Audacious programme during the Alert Level 4 lockdown in 2020.

The pair were both born in New Zealand and both moved to Canada as children.

Coincidentally, they both returned to Otago for their tertiary study, where they met for the first time.

During Audacious they discovered that alcoholic iced tea, a popular drink in North America, was not yet available in New Zealand — "and we wanted to change that", Mr Despatis said.

They launched the drink — which was initially produced in Dunedin but is now made in Tauranga — in three stores in Dunedin in December 2020, and in June last year they signed with a distributor, which resulted in their store numbers growing to 350 retailers across the country.

After two years of juggling building a business and studying, the pair recently completed their commerce degrees at the University of Otago’s School of Business, allowing them to solely focus on developing the sales of Cheeky Hard Iced Tea.

There was no summer holiday for the pair — they finished university on November 1 and almost immediately doubled their production in preparation for the summer market, Mr Yielder said.

"Everything lined up perfectly well for us ... so we are able to focus a lot more time on it now," he said.

Summer was the busiest time for alcohol sales and sales of Cheeky Hard Iced Tea had tripled between November and December.

That had exceeded the pair’s expectations, Mr Despatis said.

Now they were working on the business full time, they had plans for where they wanted to take it in 2022.

They would be aiming to expand their network of stores and trying to get the drink into on-licence locations, such as bars and clubs.

They were also in the "very early stages" of exploring the possibility of exporting Cheeky Hard Iced Tea, Mr Despatis said.

The pair recently returned from a road trip around the North Island, where they met their distributor, manufacturer, retailers and suppliers.

The aim of the trip was to try to build face-to-face relationships, after Covid-19 restrictions largely stopped that for most of last year.

"It was great driving around and pointing out the stores that we are stocked in ... It is a real buzz," Mr Despatis said.

Asked whether he had expected Cheeky Hard Iced Tea to grow so much in 2021, Mr Yielder said he did, but probably underestimated how much work would be involved.

"Initially, I thought we could do it, but that we actually have, I’m quite surprised," he said.

Dunedin had been a great place to start a business, especially because of the support networks it had for businesses, and it was where they saw their base in the future, Mr Yielder said.

"It’s hard to say where the future may take us, but we are happy here for the time being."