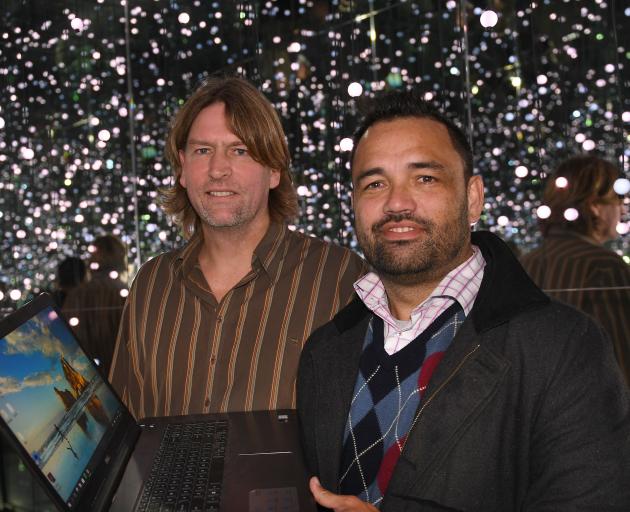 Paul Hansen (left) and Rueben Skipper, from 1000Minds, in the Infinity room at Otago Museum. Photo: Stephen Jaquiery
When it boils down to it, life is a series of decisions.

Since its establishment in 2003, Dunedin-founded software company 1000Minds has been helping people make decisions.

With five staff now split between Dunedin and Wellington, it has operated largely below the radar but is world-leading in its field, with a swag of international customers.

When co-founder Paul Hansen received an email from a Google engineer, he thought someone was playing a trick on him.

But the inquiry was legitimate and led to the multinational tech company becoming a customer. Another previous user was aerospace giant Boeing.

The fact that a small company in a small country ''in a corner of the world'' could compete globally was remarkable, Prof Hansen said.

1000Minds was an online suite of tools and processes to help individuals and groups with their decision-making and also for understanding people's preferences via conjoint analysis.

The company's origins stemmed from Prof Hansen's own research at the University of Otago. Before becoming a professor of economics, he was doing his PhD when he started thinking about how patients were prioritised for operations and how it was decided who was first and last.

He invented an algorithm that would arrive at weights that could be used to rank order for patients.

He and Franz Ombler then teamed up to create the software and the 1000Minds company was formed in 2003.

He described himself as very passionate about the area of decision making.

''That's really what life is - a series of decisions,'' he said.

It was great having connections and the crossover with the University of Otago. The university and Dunedin was a ''magic mix''.

He had the good fortune of bumping into someone who shared the dream. Mr Ombler, now finishing his PhD, thought it was ''pretty interesting''.

1000Minds' first major customer was the Ministry of Health, which has used it to prioritise patients for elective health services since 2004.

The pair realised it was a solution for not just the health sector, but that it could be applied to virtually every situation. That meant a ''really big opening''.

If ''decision making software'' was googled, 1000Minds came up as number three. Wikipedia was first.

Each day, the number of people signing up was usually in the teens and that was boosted if it was mentioned in an academic journal.

Since launching, 1000Minds has been growing gradually and there were now five employees. Newly-appointed head of sales Rueben Skipper - well known in Dunedin's start-up scene - and Prof Hansen were based in Dunedin, and three in Wellington, including Mr Ombler.

As well as commercial clients, 1000Minds was used for research and teaching and more than 800 research projects had been completed or were under way at more than 200 universities worldwide.

Prof Hansen, who lives in the coastal community of Long Beach, said the internet had enabled a small company ''to really punch above its weight'' internationally.

It allowed those involved with the company to live in a beautiful place while also being globally competitive. Fifteen or 20 years ago, that would not have been possible, he said.

He could do Skype calls or check emails ''even from Long Beach''.

When it came to the model, Prof Hansen talked about a ''three-legged stool'' - it had to be commercial, otherwise it would not survive; it had to have academic credibility; and then there was the intellectual property - it had patents on its software and was also always developing new algorithms and improvements.

The business had never been in debt and it was growing and Mr Skipper believed it could grow further. It was solving complex problems and problems that were important, he said.

From the start, the business had encountered nothing but kindness, support and generosity, which was sort of antithesis of what the stereotypical environment might be, Prof Hansen said.

Citing the Google example, which led to a conversation, he said the accessibility was remarkable. ''The world is so connected,'' he said.

The intention was not to stay a start-up. It wanted to be a ''proper, bona fide'' big company.

When it came to the future, Prof Hansen said Mr Skipper had the commercial nous essential to what it wanted to do next.

Mr Skipper said being able to make an impact was something that excited him and he hoped he would be able to help steer some long-term direction from the company. He believed it could ''go a long way''.