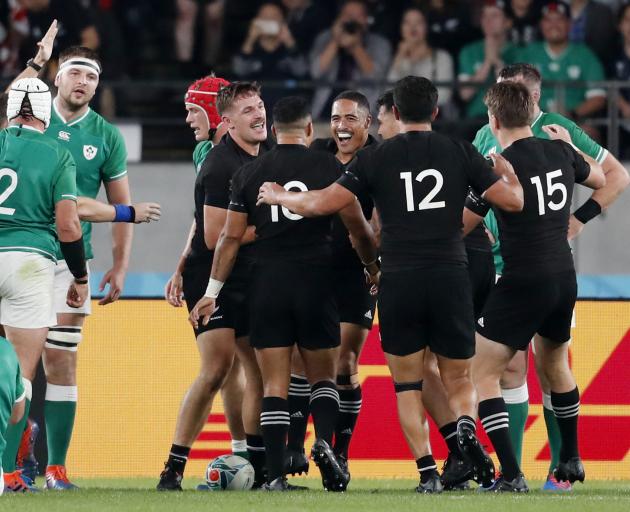 The All Blacks congratulate George Bridge during their comprehensive win over Ireland in Tokyo. Photo: Reuters
Sky shares - which touched $6 as recently as 2015 - fell to a new all-time low of 79c yesterday, for a market cap of just $344m (putative sports rival Spark is valued at $8.2 billion).

The stock has been buffeted for months. It's now down 65% for the year as an aggressive turnaround plan has been outweighed by negative sentiment over declining profit, the suspended dividend and, earlier this, week, official guidance for lower earnings and lower revenue in 2020.

The latest swoon has to concern NZ Rugby.

NZ Rugby's being given a 5% stake in Sky was pitched as an innovative element of the five-year deal (which the  New Zealand Herald understands was worth around $400m overall). And it may be, in sports terms. But in the broader business world, it's common for companies to include a stock element to a deal as a sweetener, or to make up for a shortfall in cash.

Veteran investors will tell you, of course, that share ownership is a long-term game. And in NZ Rugby's case, it is literally. The union is required to keep its holding for a minimum two years.

And in that time, Sky's stock could bounce, at least according to Fat Prophets analyst Greg Smith.

"I still see the potential for $2, possibly even towards late 2020 as streaming gains kick in," Smith told the Herald on Tuesday after Sky issued its forecast for next year.

He believes reduced profits and other gloom are already built into the stock, and then some, and that investors are unfairly discounting the new Sanzaar deal - which Smith saw as utterly crucial to Sky's medium-term prospects, and he sees major potential for the pay-TV provider's recent acquisition, global streaming player RugbyPass.

If Smith is right, then NZ Rugby could sell its shares for a tidy $40m, or more.

Other analysts are more reserved, however. UBS's Phil Campbell had a buy rating and $1.50 12-month price target ahead of Tuesday's earnings downgrade. After, he kept the same rating, but lowered his target to $1.40.

And Forsyth Barr has lost the faith. After Sky's guidance, the wealth manager cut its rating to "underperform" and its 12-month target price to 80c.

The media environment, including escalating competition in streaming from global-scale competitors like Netflix and the new Disney+ and Apple TV+, has become just too tough to give Sky the benefit of the doubt, ForBarr analyst Matt Henry said.

The arrival of Disney+ has seen Sky have to surrender its two Disney channels, which will shutter on November 30. Bear-ish analysts see more trouble ahead with the launch of HBO Max next year and other cut-out-the-middleman streaming services, including the Disney-owned ESPN+.