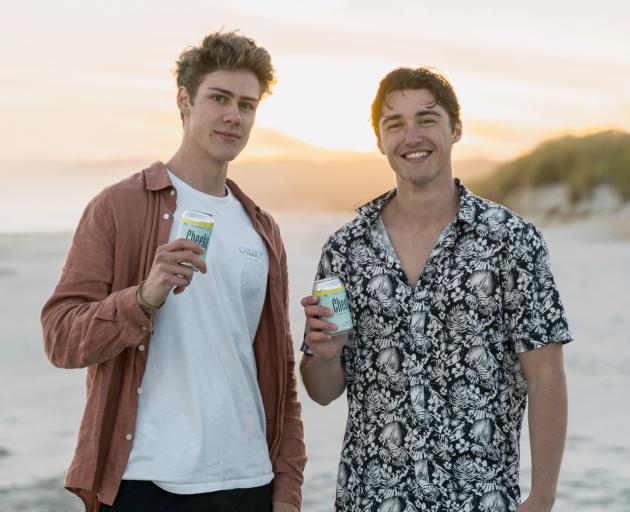 Now University of Otago classmates and friends Brendan Yielder and Olivier Despatis have found themselves with a bona fide business while continuing their studies.

They have hit retail shelves and are looking to go national with New Zealand’s first alcoholic iced tea beverage.

The third-year commerce degree students were both born in New Zealand but then moved, as children, to Canada, where hard iced tea was a common alcoholic beverage.

Coincidentally, they both moved to Otago for their tertiary study.

When they first talked to people, they assumed they had known each other since kindergarten, but they met at university, Mr Yielder said.

Last year’s Audacious programme began during the first week of lockdown and the pair needed an idea. Both were interested in doing something in the beverage space.

They had seen the growing RTD category in New Zealand and also how there was a shift from high-sugar, high-calorie options into the likes of seltzers, catering for more health-conscious consumers. But there was not really a drink in that market that was non-carbonated.

Once things started opening up after lockdown, they started working on whether it was possible for two students, with no previous experience in the alcohol industry, to try to make some headway.

So far, they agreed, they had done quite well.

Their initial sample was concocted in Mr Yielder’s flat and they then started working with a flavour house in Auckland.

Putting it in a can was probably the most complicated and expensive thing they had to do, they said.

They had been working with New New New brewery in Dunedin, which took contract customers for its canning line, and about 35,000 cans of Cheeky Hard Iced Tea had been produced in the past two months. Those cans had all been hand-packed with the assistance of two of their flatmates.

The drink was now stocked by five retailers, mostly in the Otago region, and by mid-week this week, all stock had been sold.

The pair were now planning to move production to Tauranga, enabling them to produce larger amounts, and they were looking at the next new challenge of getting more retailers on board.

They were focusing on Auckland, Hamilton, Wellington and Christchurch, particularly targeting retailers near universities.

Asked how they juggled study and business, Mr Yielder said they discussed while "in the thick of it" last year, that they were doing better at university than ever before.

He believed that was the combination of starting to put the theory they were learning in class into practice.

Mr Despatis agreed, saying the two went well together; applying what they were learning in a real life business situation was the "best way to learn".

"It’s been an incredible learning experience so far," he said.

Mr Yielder said the pair worked well together and they also made time to "wind down" and make sure they still enjoyed their remaining time as students. But they were still also willing to "put their suits on".

Over the next six months, they planned on getting a national presence and they were also looking to grow their product line.

They were also ready to commit full-time to the business once their studies were completed.

"We definitely didn’t understand what we were getting ourselves into [but] I don’t think either of us are having any regrets. There’s no other way to learn like hitting the ground running," Mr Yielder said.

Asked whether they had tired of drinking their own beverage yet, Mr Yielder said they still enjoyed it, although he quipped that there were "one of two products tests at 9 in the morning" they could have done without.

Applications for this year’s Audacious programme close on March 14, and the pair encouraged students to enter.

"I would say, ‘Go for it’. I reckon it’s one of the best ways to make the most out of the uni experience," Mr Despatis said.

Mr Yielder said everyone they met through Audacious, from past competitors to mentors, had been very supportive.

"Anyone we reached out to with a question made time to sit down with a coffee," he said.

"...particularly targeting retailers near universities." Great, just what we need, more alcohol at the Uni. Dare to be dumb.