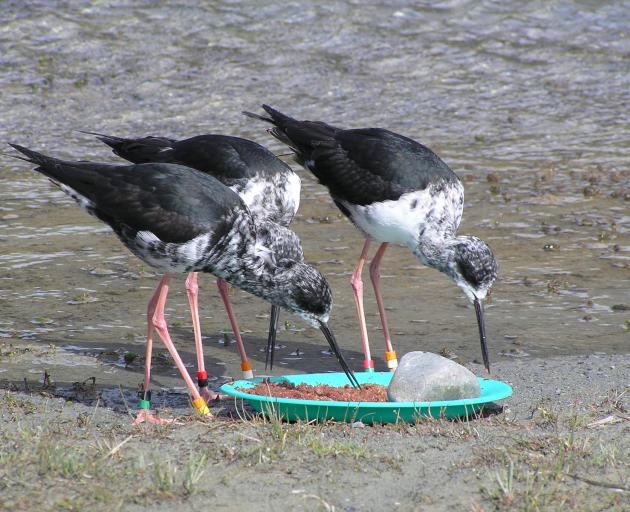 Black stilts tuck into a meat-based diet at the captive breeding programme in Twizel. Photo: Supplied
Alliance Group might have customers in 65 countries but a group of long-legged consumers living in Twizel are among the most unusual.

Each week, ox hearts from Alliance plants are frozen and sent to the Smithfield plant, where they are put through a very specific process to meet requirements for the Department of Conservation's captive breeding programme for endangered black stilts (kaki).

The hearts are thawed and trimmed of excess fat, then minced, refrozen and cut into blocks for delivery to the programme.

They form an important part of the scientifically formulated diet fed to the chicks until they are released, usually at 8 to 9 months old.

Doc Twizel operations manager Sally Jones said supplementary feeding continued for another six weeks after release while the birds learned how to find their own food in the wild.

The black stilt, which is the world's rarest wading bird, is one of New Zealand's most endangered birds. In the 1980s, the population fell to 23 in the wild, but a recent count showed there were now 132.

During the busiest times, the Twizel facility held up to 160 birds, which could eat 7kg-8kg of food a day, Doc aviculturist for the black stilt recovery programme Liz Brown said.

''Feeding these birds a natural diet of freshwater invertebrates would be a monumental task. Having a good-quality diet is vital to allow the programme to continue producing large numbers of birds and ensure their welfare while in our care,'' she said.

Alliance Group general manager manufacturing Willie Wiese said it was very satisfying to hear about the growing success of the breeding programme.

Last year, Conservation Minister Eugenie Sage announced the ambitious Te Manahuna Aoraki project, which would create a predator-free mainland island of up to 310,000ha in the upper Mackenzie Basin and the Aoraki Mt Cook National Park.

It aimed to provide a safe, secure habitat for 23 native species, including the black stilt.