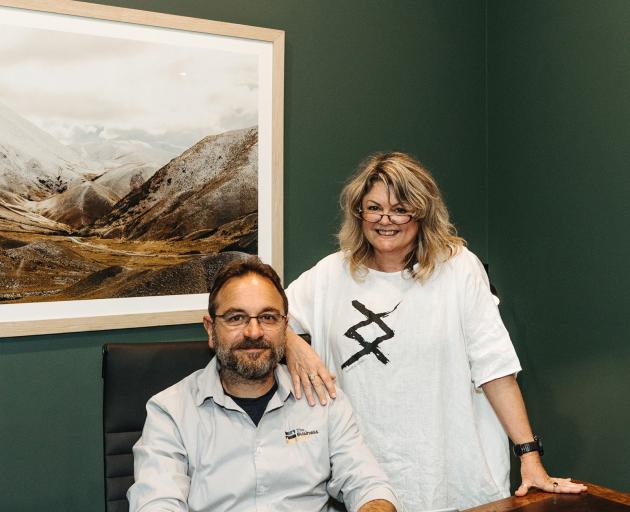 Alex Regtien and Cara Tipping Smith work in a private office in The Business Hive, which features former Waitaki District Council chief executive Fergus Power’s desk. PHOTO: RACHEL WYBROW PHOTOGRAPHY
Oamaru has been abuzz with the recent opening of the redeveloped coworking space The Business Hive in the town’s main street. Business editor Sally Rae talks to its co-founders about the ambitious project — and why they love the Whitestone City.

Alex Regtien and Cara Tipping Smith have been as busy as bees.

The former Auckland couple have spent just over a year overseeing their most ambitious project yet; the relocation of The Business Hive from an Oamaru side street to a high-profile location on the town’s main street, and redeveloping the two-storey building.

The result is extraordinary, a classy yet comfortable coworking space, triple the size of its previous home. It features permanent and temporary desks and meeting rooms — all named after local industries and with their own ventilation — as well as training space.

Quirky art and details feature throughout — who would have thought of an old cash register, with mint planted in its drawer, taking pride of place on the large kitchen table — yet appropriate given the building previously housed financial institutions, including Westpac.

The couple were proud of what they had achieved after what had been "such a huge process — just dust and mess".

"Finally, through a haze of GIB dust, it started to emerge and, by December, we knew were we close, we could set a date," Mr Regtien said.

The Business Hive officially moved out of Ribble St on December 31 last year and the doors opened in the former financial services and radio station building on January 10.

There were still things to "tick off" — but "it’s a great feeling knowing the back is broken", Mr Regtien said. Ms Tipping Smith was keen to do "so much" including in the youth and startup spaces, along with opportunities to get more training to Oamaru.

In Ribble St, The Business Hive was "tucked away" and hard to find. Its now prominent location would hopefully bring in some additional dollars to the town, as visitors spent their money.

"It’s our limestone city but there’s other aspects to Oamaru as well. We love living here, we wouldn’t go back [to Auckland] for anything," Ms Tipping Smith said.

When born-and-bred Aucklander Mr Regtien first phoned his partner and asked how she felt about moving to the Waitaki district, she immediately started googling.

She was on the skifield at Ruapehu with a friend and god-daughter, enjoying one of her favourite pastimes. When she discovered how many skifields there were in the South Island, she replied, "I’m in."

Mr Regtien, who was offered a job as operations supervisor for Downer, had never been to Oamaru before. His partner had fleetingly passed through on her way to Bluff where her grandparents were from.

The couple met 10 years ago when Mr Regtien had a gardening job, while studying, at a block of townhouses where Ms Tipping Smith was living.

They struck up conversation and then he asked her out — "and I tried to get out of it" — but the first date was a success and the couple have been together ever since.

Moving south in 2016 was "no deal at all" for Ms Tipping Smith who had moved 10 times already.

But Ms Tipping Smith, a long-time copywriter, found there was a lack of business networking groups for her to attend. She joined the Waitaki Newcomers Network and became involved with the Waitaki Community Gardens, and Janet Frame Eden St Trust.

She started a coffee group, but realised that talking in a public space could be awkward, so looked to find a suitable building.

Coincidentally, she looked at the Thames St premises where The Business Hive is now housed but decided it was "way too big" for an unproven concept.

So the coworking space opened in Ribble St in 2018 and Mr Regtien later left his job at Downer to join The Business Hive.

He had a different perspective coming from a corporate background, including Health and Safety knowledge, while Ms Tipping Smith was "all about small business", business support and people coming to town.

It became clear it was like a two-person team with different strengths, she said.

The Business Hive "ticked along" and then Covid-19 hit. They started looking around at buildings, thinking they could offset rental exposure if they owned a building.

Settling on the Thames St building, they thought "a lick of paint, an extra toilet [and] we’ll be good to go", Ms Tipping Smith said.

That proved overly optimistic and they had to embark on an extensive, expensive redevelopment after getting the keys in December 2020.

They realised they needed an architect to "bring everything together" — there was simply too much to be done.

The services of more than 60 local businesses were used. Their aim was to "make it just interesting to be here," Mr Regtien said.

He acknowledged the couple would not have been able to embark on such a venture in a major centre, while Ms Tipping Smith said it was affordability that helped create "that community essence" in such a space. For businesses, it offered reduced overheads as there was no need to maintain a building if they did not want to.

With people moving to the regions, the only thing holding them back was the lack of housing, Mr Regtien added.

With no educational training in the town, Ms Tipping Smith believed the community needed to figure out how to ensure that people did not necessarily have to leave the district, accumulate debt through tertiary studies and then not to be able to return.

The Business Hive was just one part of that but, collectively, she wanted to help ensure the district was a great place to live, work and play.

Speaking of play, Mr Regtien said he was hoping to have some weekends when they did not have to work, and have some time off. They were hoping to cycle the Alps 2 Ocean cycle trail next month and he might finally be able to paint their house.

Ms Tipping Smith said she wanted to sit on the phone with her girlfriends in Auckland for two hours — "it’s been that listy thing [on the to-do list], I haven’t got time to do it."

"Actually I’m looking forward to it. It’s been long enough. A bit of work/life balance, we reckon that’s important for everybody else so [we should] jump on that bandwagon too."

Looking back, the redevelopment project had "been a blast". She had previously said that she would never be doing it again. But then, she said that at Ribble St — "So who knows?"