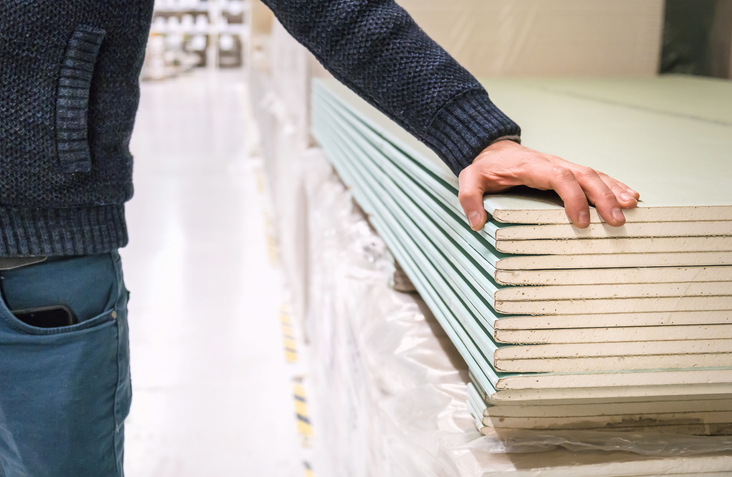 Severe shortages of plasterboard have been a problem for the construction industry in recent times. Photo: Getty
Competition is not working as well as it could in the residential building supplies sector due to the regulatory system, quantity-focused rebates, restrictive land covenants and exclusive leases, the Commerce Commission has found.

Anna Rawlings, commission chairwoman, is this morning announcing the results of a long investigation into the market.

She said exclusive leases with landlords had the potential to impact competition.

But vertical integration did not appear to be a factor affecting competition over the longer term.

The commission is recommending competition be an objective to be promoted in the building regulatory system.

It wants a Māori perspective reflected, to open pathways for a broader range of key building supplies, an examination to be made into removing impediments to substitution and variations and an investigation into whether barriers to certifying new products can be reduced.

A new register has been announced to share information about building products and consenting. This will help centralise information and allow people to share knowledge.

Rawlings referred to the plasterboard sector in particular and said there were some initiatives being employed already that were good examples of what's possible to better enable competing products to come here.

But the commission has stopped short of recommending breaking up any businesses in the sector, saying "vertical integration" of businesses in the industry did not appear to be a factor affecting competition over the longer term.

Proceedings were planned to be brought this year to enforce the law, Rawlings said.

Referring to rebates, she encouraged builders to invoice their customers at the true price they had paid for goods and be "truthful" about what they were paying when they invoiced their customers.

The cost of building materials has been a talking point, even before the latest bout of inflation.

The Productivity Commission estimated people in New Zealand pay between 20 and 30 percent more for building materials than those in Australia, and 28 percent product price rises are being clocked lately.

An Ebos survey out in December showed 16 percent rises in the latter three months of last year.

But participants forecast a further 12 percent rise in the next half-year, resulting in a compound 28 percent.

Ross Taylor, Fletcher's chief executive, told the commission materials were but a small portion of overall house price costs and it wasn't looking in the right direction if it wanted to uncover why house prices were high.

Carter Holt said there were "numerous other competitors" in the sector. Rebates or loyalty payments by its Carter's national retail chain to trade customers didn't affect their buying decisions.

Taylor said: "Building materials in total comprise only approximately 19 percent of the residential development cost of a typical double-storey house in Auckland, which is one of the most common build types in that region.