Diversifying in the Catlins

Carey and Tracey Hancox look out over Catlins Lake and Owaka Heads from their lodge. Photos: Stephen Jaquiery
Enterprising Catlins farmers Carey and Tracey Hancox have diversified their busy farming operation near Owaka with an accommodation venture and an on-farm butchery, processing their homegrown lamb. Agribusiness reporter Sally Rae pays them a visit.

Carey and Tracey Hancox make the most of opportunities as they arise.

The couple have a simple philosophy when it comes to their business — "no-one gets anywhere without hard work".

"It’s just a fact of life, really. It’s not easy. People look happy once they’re successful but I think it’s reflected in how hard they have to work.

"That little bit of happiness is the payment for the stress and the worry. It balances itself out," Mr Hancox explains.

Their property, Tiromoana, covers  760ha, where they farm sheep and cattle and grow trees  amid spectacular views.

The acreage has expanded substantially over the past 21 years, since Mr Hancox bought his first 130ha farm, and now totals six blocks.

Originally from Tauranga, he arrived in the South when he was about 19 and went shearing.Despite coming from a non-farming background,  he found he  enjoyed the farming sector. 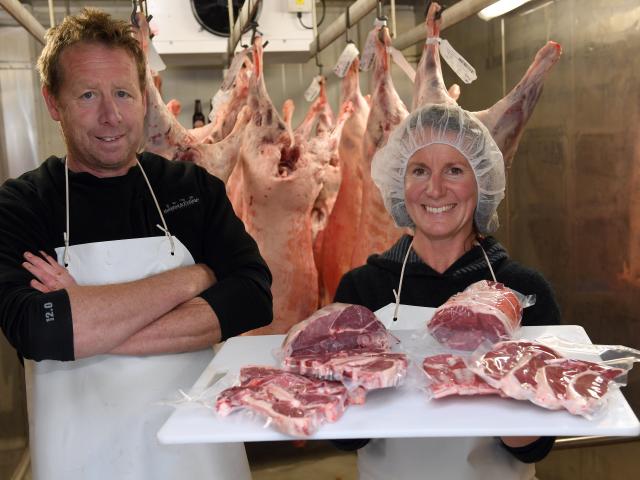 Carey and Tracey Hancox with some of the crossbred meat they grew and process on their Tiromoana farm near Owaka.
He was shearing in West Otago for about 10 years, while also travelling back to the North Island to shear, and did a stint in Scotland.

When a friend was looking to buy a farm, he pricked his ears up and ended up buying his own property in the Catlins.

Shortly after that, he met the woman who was to become his wife. She

came from a Clinton farming background  and was working in woolsheds during her university holidays. Owaka was quite a depressed area when Mr Hancox bought his first farm and initially he wondered about the wisdom of moving to the area. But he could see  it was strong farming country and, several decades later, does  not have any regrets.

All the properties were  developed with a "huge" distance of fencing, along with extensive  plantings.

Along with forestry — pinus radiata, macrocarpa and Douglas fir — there had also been a lot of native plantings. It had been a major undertaking but it was something that was very important to the couple.

As far as sourcing native plants, their nursery was "everywhere" and all the flora meant abundant birdlife, including tui, bellbirds, wood pigeons, fantails and waxeyes.

Fortunately, fencing was something  Mr Hancox was very adept at; he started working for a fencer after school and at weekends when he was 13 or 14, during the horticulture boom in Tauranga.

Diversification was a result of debt and, for the past five years, the couple  had been winter grazing dairy cattle.

When they bought a block of land that came with a small house, which was quite run down, they looked at various

options, including whether to rent it or offer accommodation. They chose the latter and it had proved a good option. Catlins River Station House, which was renovated, is located at the head of  Catlins Lake on the farm boundary. It has been going for about six years and people loved it, Mr Hancox said.

Visitor numbers to the Catlins were growing and, while it was never going to be as popular as  Central Otago,

it was a nice place. Increasingly, over the past five years they had noticed more people on the road. In 2014, they opened Tiromoana Lodge, which is nestled on a hill with spectacular views of the Catlins coast.

Originally built for Mr Hancox’s parents, the high-quality lodge attracts  a mix of both domestic and international clientele.

They are enjoying the diversity of lodge customers, including visitors from Mississippi who owned  Coca-Cola bottling plants.

Mrs Hancox, who gained  a commerce degree majoring in tourism, said she loved the accommodation side of the business.

While she had tackled  a lot of marketing papers, it was so different now with  good  internet  and it still felt like she was learning, she said.

Guests could  take  farm tours and enjoy  gourmet barbecues,  with the property’s  Catlins Coastal Premium Lamb always on the menu, cooked by Mr Hancox who has had a long-standing interest in both cutting and cooking meat.

Last year, when the couple were in England for a wedding,  they ended up in a farm shop in Bath. They got talking to the owner, who  invited  them to stay with them. It turned out  her husband had spent time in New Zealand and they had a mutual friend. The Hancoxes stayed there for three days and were impressed with the "beautiful" big farm shop. Mr Hancox started thinking about  doing something with meat and guests had also been inquiring about meat.

Their crossbred lambs were  killed at Prime Range Meats in  Southland and they pick up the carcasses when a truck comes  through Balclutha three times a week.

Mr Hancox then processed the lambs to whatever the customer wanted,  with various options being offered. The meat was then vacuum-packed and dispatched  as far afield as Garston and Timaru.

At the moment, they were only offering lamb but they would like to add  beef eventually and Mr Hancox was keen to expand  into ageing meat.

There was provision for another container to build an aged-drying chiller, with the aim of supplying a niche market into restaurants, but they would see how the business grew.

"Essentially, we’ve got to walk before we can run," Mr Hancox said.

As  with the accommodation, the butchery also involved "a huge amount of learning", Mrs Hancox said.

Product had changed from when they first started, as they learned what consumers were looking for.

A lot of their meat was now butterflied, which took less cooking time. The next product line will be  sausages and patties.

The farm employs two staff but if Mr Hancox moves further towards the butchery side, he might need to employ someone in a senior role "making decisions that I would be making".

On the farm,  his favourite place was the  butchery.

"I love my sheep but I don’t like being in the sheep yards," he said.

For Mr and Mrs Hancox’s three children, George, Will and Sam, the Catlins is a veritable outdoor playground for the farm-mad boys.

Two are at boarding school but enjoy hunting, fishing and whitebaiting whenever they get the chance.

Mr Hancox said it was the "best upbringing" for children and  they  were privileged to have that sort of childhood. Will (11) recently shot his first deer.

Next year, Mr Hancox was looking to put the rams out a little earlier — so it coincided with holidays so the boys would be home for tailing — providing an enthusiastic workforce.

Despite making so much progress over the years, rather than dwelling what they had achieved, the couple were "always looking for the next thing", Mr Hancox said.