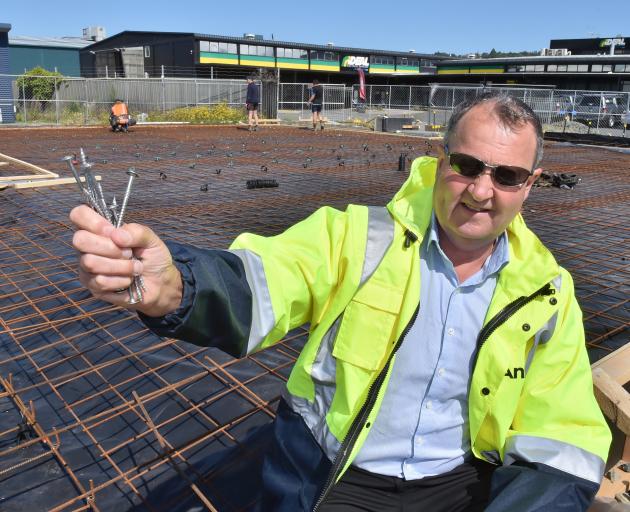 "Dunedin’s got a real big buzz about it at the moment," said the Anzor account manager, who has been working from a small office in the city for two years now.

The company is the largest supplier of stainless steel fasteners in New Zealand and has been delivering products to builders and engineers overnight from Christchurch.

This will be Anzor’s 12th branch in New Zealand, once it opens on April 1.

"We were supplying as people needed it but the growth has been quite phenomenal in the last two years," said Mr Fitzgerald.

The Portsmouth Dr construction, opposite the Harbour Mouth Molars, was signed off before Christmas and the tilt slab construction will be complete towards the end of March so the store can open at the start of April.

The Dunedin branch will start with about four staff. Recruiting begins next month.

"I know one person in Auckland is very keen to come down and try the Dunedin lifestyle ... so he’s probably got a shoe in the door," Mr Fitzgerald said.

The future was bright for the commercial construction sector in Dunedin, he said.

"You’ve got things like the hospital build coming up.

"There’s a couple of major schools being built. Engineers are really stretched at the moment. There’s a real lack of labour here for ... qualified engineers and builders.

"We’re riding the crest of the wave of the building industry and Dunedin’s probably got the best engineering base in the whole of New Zealand. That’s our key market — both engineering and building bases."

But setting up the branch was not straightforward and Mr Fitzgerald said the company decided to pay early for the site he hoped would eventually pay its way.

"It was a site we wanted and we went ahead and paid for it straight away."

The Dunedin site means the company can now deliver to clients on the day as purchase in the city, as well as in Invercargill and Central Otago.

Mr Fitzgerald said the building industry was "going really big" on stainless steel at the moment, which was preferred over galvanised fasteners because of its durability against sea water.

He said the branch would have about 60,000 items inside it from "small nuts and washers to large, commercial-sized bolts".