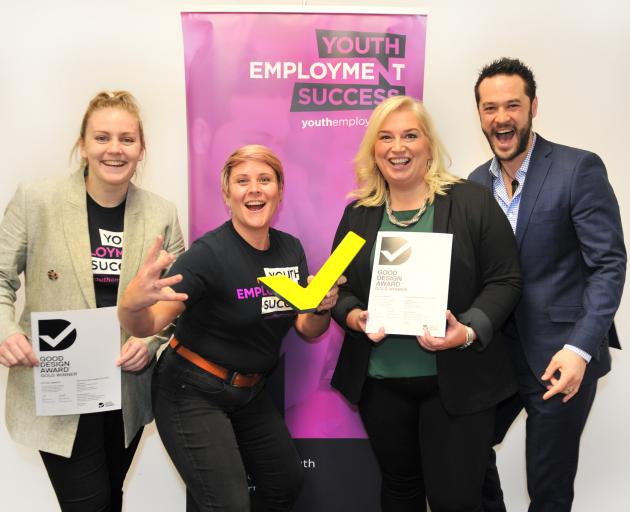 That is why those behind the youth employment initiative entered the 61st annual Good Design Awards in Australia.

At a recent ceremony in Sydney, Youth Employment Success (YES) won gold in the social impact category in recognition of outstanding design and innovation.

Judges praised the initiative, saying: ''we commend YES for changing the power dynamics in employment or job-seeking relationship by empowering young people to reach out to potential employers''.

They looked forward to seeing how the programme scaled nationally and encouraged a return entry ''in a year or two'' with a wider impact case.

The dream for YES was to go global but, in the meantime, it was ''baby steps'' as it rolled out into other centres through New Zealand, one of the programme's drivers, Rebecca Twemlow, managing director of Firebrand, said.

Talks were being held with four other centres about implementing the scheme - Waimate, Waitaki, Whangarei and Balclutha.

And the scheme was being ''handed over'' to the Eastern Southland community, where it had been operating for a year.

It needed to be taken on by communities to be successful, Mrs Twemlow said.

YES was launched with the goal of finding employers offering opportunities to young people and telling their positive stories.

It involved the Ministry of Social Development, Otago Southland Employers' Association, Otago Polytechnic, the University of Otago and the Otago Chamber of Commerce.

The opportunities offered through YES were varied: it could be a job, or a chat about career progression, or the industry. It could be a mock interview, assistance with a CV or a walk-through of a business.

As well as becoming a certified youth-friendly employer, employers involved also received a resource pack containing tools to help them understand how they could further create opportunities for youth.

YES involved more than 80 employers in Dunedin and 20 in Eastern Southland and ''hundreds'' of opportunities had been delivered. There had also been some direct employment outcomes, Mrs Twemlow said.

Since its launch in 2016, there had been a 17.3% reduction in youth unemployment in Dunedin, Ministry of Social Development regional labour market manager Emma Hamilton said.

While that could not all be attributed to YES, the scheme had been a big factor in that reduction.

MSD southern regional commissioner Jason Tibble said the gold award was very good acknowledgement of the ''hard yards'' the team had put in.

That recognition provided a platform to continue expansion and look at ways to leverage the recognition to produce better outcomes for young people.

YES provided a platform that allowed young people to connect with employers in a way they would not necessarily have otherwise been able to do, Mr Tibble said.

Back in the ''good old days'', a young person would get a job at weekends because their next-door neighbour ran a business, or their mother knew somebody, or their father played rugby with someone.

But as society had changed and developed, some of those opportunities that used to happen - ''just by luck'' - did not perhaps happen as much for some young people, he said.

The bigger part of YES was giving young people a taste of what various sectors and industries looked like, and what it took to have a successful career.

The next stages were to develop and to look further at Dunedin from an employment perspective, assess and match the skills that were needed.

There were also opportunities for regional flexibility to reflect the needs of individual communities.

For employers, it was a chance to give back to young people and get access to the newest and freshest talent from schools, an opportunity to build a positive reputation and to attract the leaders of tomorrow, Mr Tibble said.

Mr Tibble, who had been in the role for a year and a-half, was conscious of the ''blood, swear and tears'' that had been involved in pulling the initiative together over the years.

For Mrs Twemlow, YES had been a ''labour of love''.

Having been a ''wayward youth'', it was the contact with several people - one at a training establishment and an early employer - that shaped her own pathway.

Without that, Mrs Twemlow was not sure where she would be today and such an initiative was something that still resonated with her.

It was not necessarily about a job. It could just be another adult in a young person's life who was not a school teacher or family member, giving them advice.

Individuals and businesses made a big difference just by saying yes to a coffee meeting, or a business walk-through, a look at a CV or a pretend interview.

All of those ''yes's'' made up the whole picture of the future of work for that young person, she said.

Such a programme was also based on a community embracing it. It was hard to be in business but employers also had a responsibility to ensure young people in their community were ''taken care of''.

Mrs Twemlow was very proud to be waving the Dunedin flag at the Good Design Awards in Sydney - appropriately wearing local label Company of Strangers - and she hoped other businesses would recognise there were more opportunities to do that.

Lots of businesses and organisations in the city were doing great things, and anyone could enter the awards which celebrated the best new products and services on the Australian market, excellence in architectural design, engineering, fashion, digital and communication design and reward emerging areas of design strategy, social impact and design entrepreneurship.

Close to 700 design projects were evaluated in this year's awards.

It was also ''really awesome'' to be able to represent those people who had been part of YES from the start, but were not necessarily still involved, she said.

That included the likes of John Allen, the former MSD southern commissioner, now retired but who still kept in regular contact, as well as others.

To win gold was ''fantastic'' - ''we entered because we know YES actually makes a difference'' - and the feedback from the judges was very pleasing.

''You're living and breathing this programme for four years. You do start to wonder if people see it for what it really is,'' she said.

Emma Turner, who recently took over looking after YES at Firebrand, said it was an exciting challenge.

Her role was diverse and included event co-ordination, holding regular open sessions, getting in touch with employers and social media co-ordination. She was also excited about seeing it hopefully going out to more locations.