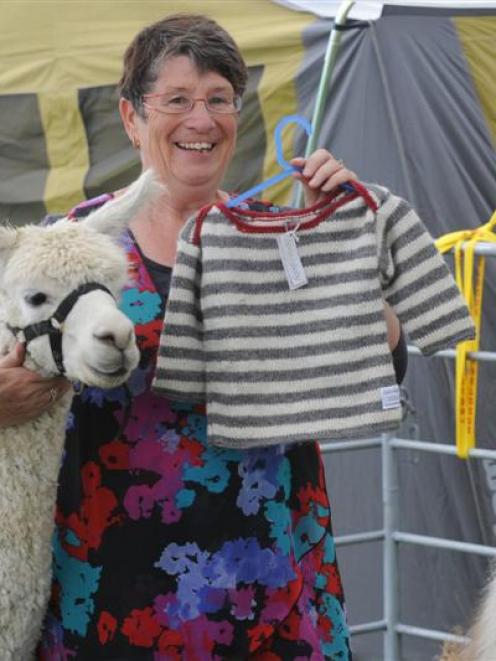 Brenda McLean with a child's jersey made from alpaca fibre at the Southern Field Days at Waimumu last year. Photo by Stephen Jaquiery.
Brenda McLean reckons there is only one slight problem with alpacas - they are addictive.

Mrs McLean and her husband, Stewart, own Windermere Alpacas and Llamas, near Milton, where they have about 250 alpacas and 30 llamas.

She is also convener of the alpaca section at the South Otago A&P Show in Balclutha on November 30.

South Otago is the only A&P show in Otago to have classes for alpacas and it usually attracts about 50 entries from Otago and Southland, Fiordland and Canterbury.

This year, Mrs McLean will leave most of the showing of the Windermere animals to her husband as she is involved with an alpaca fibre display.

A display of different colours will be set up close to the alpaca show ring and people will be able to feel the fibre and talk to Sam Gonzalez from Pacific Alpacas fibre pool about the economics of alpaca fibre, or he can fill you in about the requirements of supplying fibre.

Pacific Alpacas started about three years ago after two alpaca farmers - one in Cromwell and one in Auckland - did not know what to do with their fibre, Mr Gonzalez said.

A pool was put together and Mr Gonzalez collected fibre from throughout New Zealand. It was brought to the warehouse in Cromwell and sorted by colour and by micron, before being sold.

In the first year, some fibre was sold to the United States but, in the past couple of years, the domestic market had grown quite a lot. He estimated there were between 25,000 and 30,000 alpacas in New Zealand. White fibre, under 25 micron, could fetch more than $10/kg, while the price usually averaged about $6.50/kg.

The fibre, which was similar to merino wool, was hollow, which meant it was very light. It also did not have any grease and it was ideal for people with allergies, he said.

Mrs McLean would also have a display of her alpaca fibre baby knitwear on display, so people see what could be done with the fibre. She would also be watching the show-ring if she got a chance, she laughed.

It was one of the most friendly shows, with a relaxed atmosphere, but there was also a competitive aspect. Top quality animals were coming from Canterbury and they would be ''as good as anywhere in New Zealand'', she said.

While alpacas used to be sold mostly as pets, they were now being seen as economically viable livestock, she said.

The show was a good place for people to find out about the animals and what they could do with them.

The champion alpaca at this year's South Otago A&P Show will line up to be judged for the supreme animal of the show, which is a new feature at the event.

The supreme champion from the equestrian, sheep, cattle, goat and alpaca sections will be judged at the conclusion of the grand parade to find the overall champion.