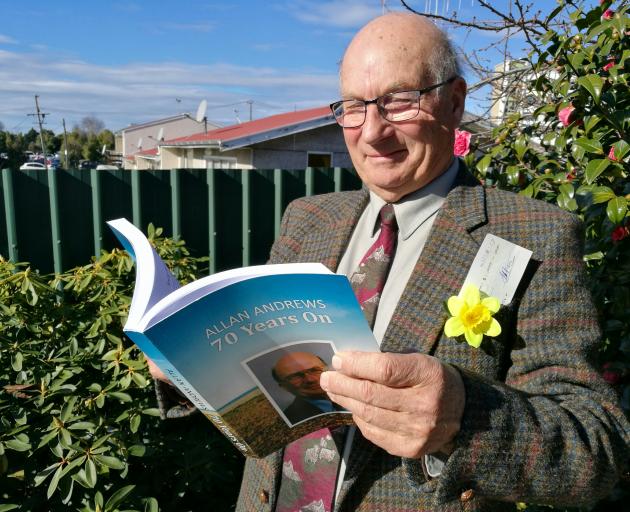 His book titled Allan Andrews 70 Years On features a range of subjects, including farming, cricket and his battle with cancer.

It was his family's history of cancer that prompted Mr Andrews to donate a portion of the book's proceeds to the Cancer Society.

The book was launched in late September to early October last year, with the aim of donating a portion of the proceeds from every book to the Cancer Society.

He visited the South Canterbury Cancer Society on Friday, armed with a cheque and a smile - and stories of his brother, Lyndsay, who died in 1961, at the age of 21, from leukaemia.

''He was my best mate and he was supposed to take over the family farm.''

Lyndsay had a sore throat and it was one of the farm's busiest times of the year - lambing.

''Dad noticed [Lyndsay] wasn't able to chase down the ewes to be caught,'' Mr Andrews said.

He was diagnosed with leukaemia and died soon after.

Mr Andrews was just 17 at the time.

''It shook my foundations to see the pain and agony he had to endure.''

Despite the death of his beloved brother, and a gaping hole that could never be filled, life had to go on.

Mr Andrews went on to win the first Radio Leadership Award, the forerunner of what is now the Young Farmer of the Year.

He later became the Waimate District chairman for Young Farmers. He was the delegate to Canterbury-Westland in the 1960s and also took up roles within Federated Farmers.

However, everything came to a halt in 1988 when he was diagnosed with acute malignant lymphoma (non-Hodgkin).

''I went through hell of eight months of chemotherapy and wondered whether there was light at the end of my tunnel,'' he said.

''My determination to beat the bastard never faltered and as I look back on life, I reflect somewhat on the journey life has taken me.''

Now it was his nature to ''help and support'' people in similar ''difficult'' situations.

The 320 page book Allan Andrews 70 Years On is still available from a range of Farmlands and PGG Wrightson outlets.