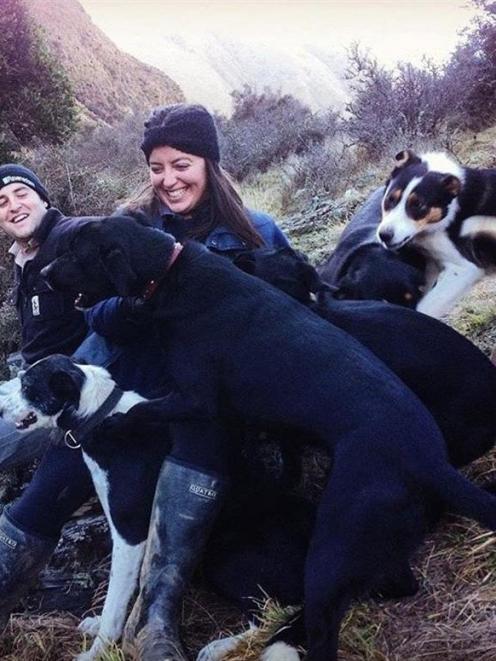 Sarah Connell with fiance Ben Douglas. Photo supplied.
It's a long way from London to Livingstone.

So when Sarah Connell made the transition from big city living to remote rural life in North Otago, it was a monumental lifestyle change.

But the former urban girl is loving country life on sheep and cattle station Dome Hills, even though shifting break fences and stock is something she once never dreamed she would end up doing.

Miss Connell (28) grew up in Auckland and met her fiance, Ben Douglas, about seven years ago. He was working in banking, while she was in design.

They were living a city life but enjoyed visiting his parents, David and Cindy, on the farm, 12km southwest of Duntroon, never imagining they would move there.

The couple headed to London for a couple of years on their OE and then the conversation started about whether they should give farming life a go.

Miss Connell had worked as a graphic designer and stylist at New Zealand House and Garden magazine before going overseas and she worked in publishing and studied interior design in London.

The couple, who are getting married in Oamaru in January, moved to North Otago 18 months ago. Miss Connell was able to continue doing some design work while also helping out on the farm.

She was loving the change of pace and the opportunity to do an array of things that she ''couldn't be doing living in a flat in Auckland''. She had learned to ride a quad bike and had driven a tractor, mustered on horseback and helped mark calves.

While it was a big change, and there were definitely moments when she did feel some isolation, the city was ''still there''.

''As long as you're prepared to drive and fly, it's there. We're so lucky with where we live and that does make it easier,'' she said.

She had been ''blown away'' by the people she kept meeting, who all came from different backgrounds.

She and another rural woman, singer Bex Murray, who lives in the Hakataramea Valley, have set up a social media site, Young Rural Ladies, to inspire and motivate other young rural women.

If they could ''put a smile on someone's face'' or someone felt inspired because of it, then they had achieved what they wanted, she said.