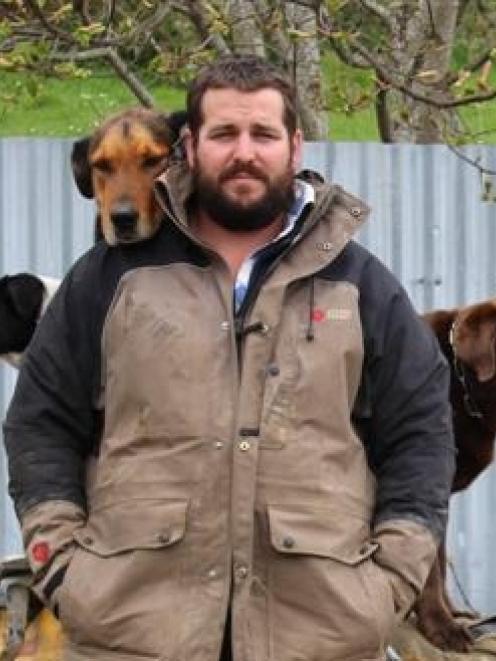 It was 2005 and, at 17, Mr Pemberton was one of the youngest regional finalists in the contest's then 36-year history.

He was still at boarding school at St Kevin's College when he competed in the Aorangi regional final.

While unplaced, he performed creditably and was a favourite with the crowd.

Fast forward a decade and Mr Pemberton (28) is still involved with Young Farmers, although there was a bit of a break in the intervening years, including while he was working overseas.

Brought up on his family's dairy farm at Mataura, he spent a year dairy farming when he left school but the dairy industry was never a passion for him.

He preferred the drystock side of farming and tractor work.

He is now managing a 485ha property at Millers Flat and has also got into fodderbeet, doing some contracting work with his fodderbeet planter.

It was a much different climate from Eastern Southland and the weather was ''quite a lot nicer''.

Mr Pemberton was one of the founding members of the Teviot Valley Young Farmers Club, which formed in 2011.

Previously, there was a Roxburgh club, but that had been in recess for about a decade, and it was decided to establish a new club.

About 18 or 19 now usually attend meetings held every second Wednesday night in the Millers Flat Scout Den Numbers were limited, due to the size of the valley, but the club attracted a range of young people.

While mostly farmers, there were also the likes of school teachers, truck drivers and a veterinary technician.

Meetings were ''pretty casual'' and fundraising was a major focus, with a lot of crutching and tailing undertaken.

A black-tie ball was held every second year.

A tertiary education scholarship was also available each year for a Teviot Valley resident intending on studying agricultural-based subjects.

Mr Pemberton has been on the Young Farmers Otago-Southland regional executive for the past 18 months and took over as chairman a year ago.

In February, Young Farmers will have a site at Southern Field Days at Waimumu.

A regional Young Farmers fencing competition will also be held at the event.

While competing in the Young Farmer Contest 10 years ago was ''pretty cool'', it remained the only time Mr Pemberton had entered it.

However, he intended having another crack this year.

The North Otago district final is being held in conjunction with the Southern Canterbury A&P Show in Waimate on November 21.