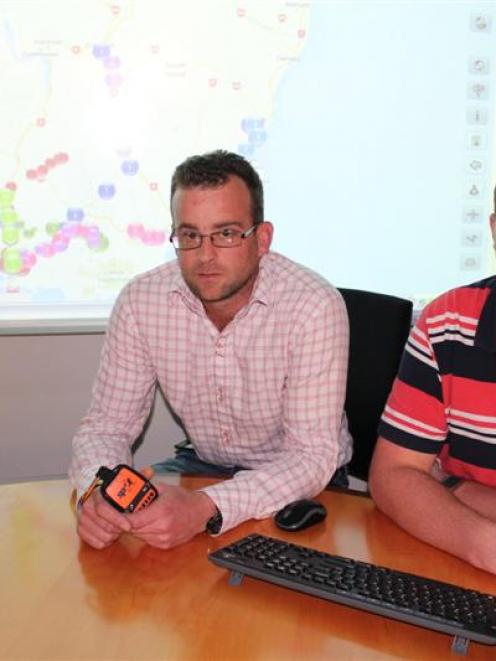 Over the past six months, IFS Growth has successfully trialled 10 spot trackers - electronic devices that allow their wearers to send pre-loaded text or email messages to selected cellphones or computers. It plans to buy another 20 over the next year.

The devices have four buttons - SOS, help, OK and tracking - the latter enabling the location of the device to be tracked every 10 minutes.

IFS Growth managing director Dan Minehan said at about $300 each, and operational via satellite in areas without cellphone coverage, the devices were a cost-effective and reliable safety tool.

''They add another level of comfort for our people who are often working in remote areas. We send guys into the forest every day and we need to make sure they come home again.''

Mr Minehan, an offshore fisherman on his days off, bought one for himself and was sold.

''When I am out at sea it is comforting for my wife to know where I am, or at least where I was when the most recent location check was made.''

He said he used the OK button during the day, sending a text message to his wife's cellphone.

Mr Redpath said a lot of work was needed ''at the back end'' to adapt the messaging and tracking capabilities of the devices for a commercial setting.

IFS Growth's system enables the location of all devices to be logged in real time on to a map displayed on a website. Messages sent from individual devices are also logged on the website.

IFS Growth manages about 15,000ha of forest in Otago and Southland for small forestry owners such as local authorities and farm foresters. It also manages small pockets of forest in the North Island.

Mr Minehan said staff and contractors issued with the trial devices were initially concerned they would be used to check up on their whereabouts and productivity, but quickly embraced the technology.

When staff left the forest at the end of the day, they were supposed to send an OK message. Mr Minehan said there had been one false alarm during the trial when no message was sent.

''It turned out the person forgot. But it was good to know that within a very short time we realised he had not checked in and were able to start looking for him.''

Mr Redpath believed IFS Growth was the only South Island company using the devices and he knew of only one other company doing so in the North Island.

He predicted the devices would be commonplace in many workplaces soon.

''It will become the norm ... for anyone working in the field or alone.

''Think of a farmer who has an accident on a quad bike. If they could reach down and push the SOS or help button, someone would know they were in trouble and could pinpoint their location.''