Embracing the old and the new 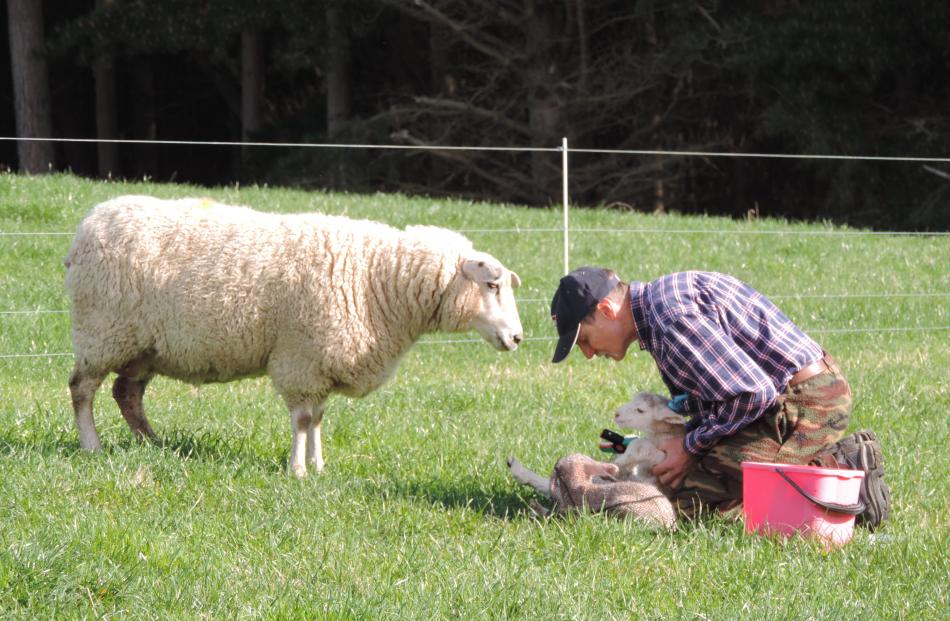 Julian Price prepares to earmark a newborn lamb under the watchful eye of its mother. Her other two triplets are sitting calmly in fishing nets alongside. Photos: Sally Brooker 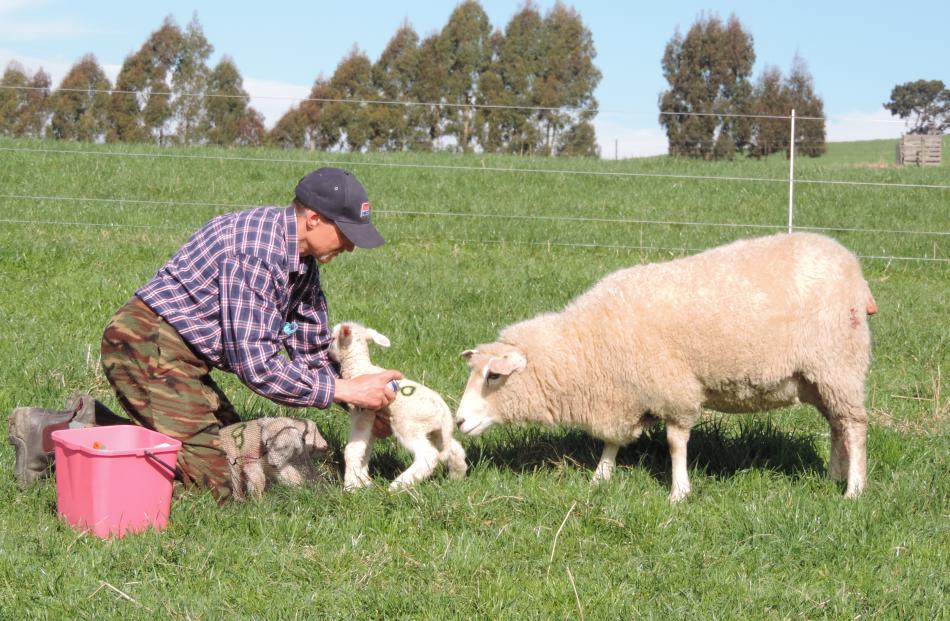 Julian Price spray-paints an identification number on a triplet. The other two lambs wait under fishing nets as their mother supervises proceedings. 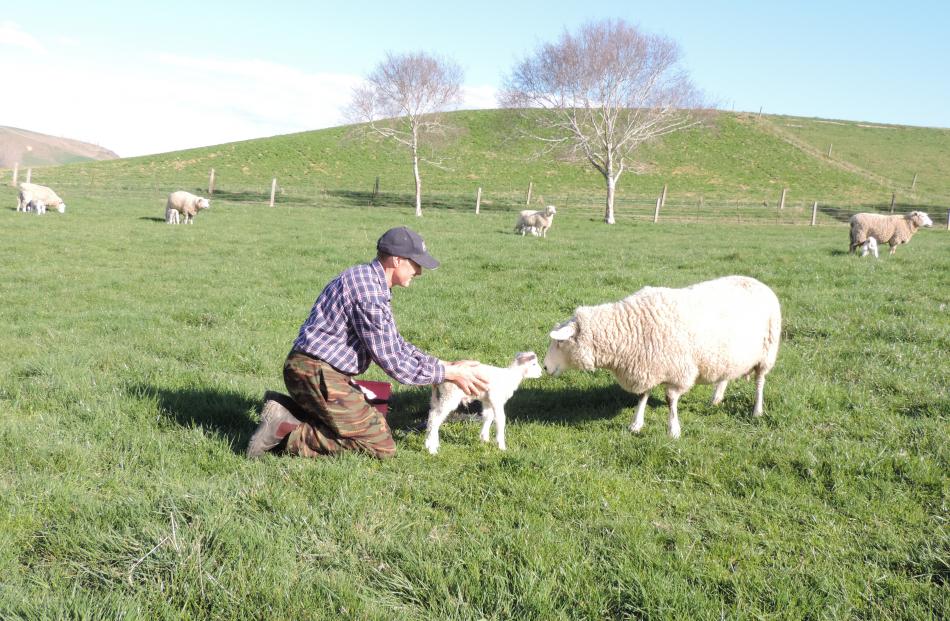 Julian Price releases a lamb back to its mother in Creedmoor's front paddock. 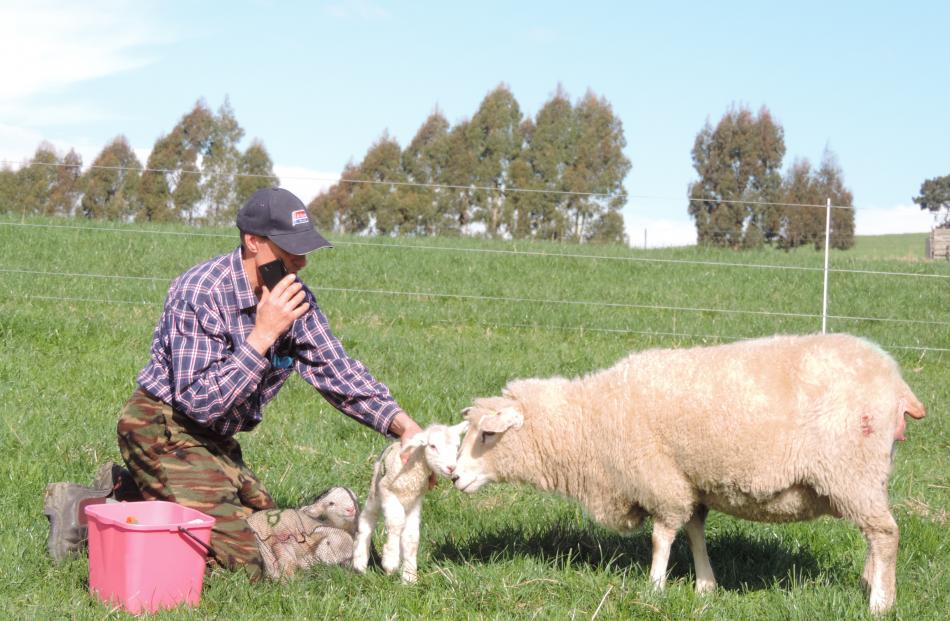 Julian Price ensures the ewe is comfortable with her lambs while he records details of the lambs' arrival and condition on his smartphone.

A North Otago sheep farm uses a mixture of the old-fashioned and new-fangled at lambing time.

Creedmoor is a 50ha block of rolling land at Incholme, west of Oamaru. Owners Julian and Sharyn Price also lease a neighbouring 20ha.

The couple have become lamb whisperers, breeding composite ewes with quiet temperaments that are not fazed by their human handlers in their midst.

Flightiness has been culled out, along with dags.

The Prices call their flock Creedmoor Supersheep - a moniker endorsed by their records. Since 2006 they have exceeded a 200% lambing rate and last year 25% of their surplus lambs were killed at three months.

High milk production, fast growth, and early puberty means the hoggets can be mated in mid-April.

For the first time in many years, the 200 ewes and 70 hoggets were expecting more twins than triplets this season. That, too, was on purpose - the Prices are planning ahead to when they will be less physically able to chase, catch and rear the third lamb in a set of triplets.

The ewes are separated into different paddocks according to their scanning results. Mr Price, who grew up on a King Country sheep and beef farm in the days of falling prices and the resultant ''easy-care'' approach to lambing, goes on a thorough lambing beat twice a day.

''I do triage in the morning. In the afternoon, I do the tagging.''

He drives the ''lambulance'' that featured on the back page of the previous edition of Central Rural Life right into each paddock. The ewes look up and walk quietly out of the way if necessary; otherwise they continue grazing and feeding their lambs.

In the triplets paddocks, Mr Price gets out his bucket of supplies dubbed the ''field hospital''. He then picks up a fishing net in each hand and approaches a ewe with lambs born since the previous day's beat.

Nets are placed over two of the lambs while he catches the third manually. It is held out to the ewe so she can see what's happening and not be alarmed.

Mr Price makes an earmark, inserts a tag with an electronic chip, spray-paints the lamb's identification number on to each flank, then speaks into his smartphone to record the birth and condition of the lamb.

Finally, the nets are taken off and the lambs are free to go with their mother.

''In the lambing beat, I always think would this have survived if I wasn't here,'' Mr Price said.

The Prices have ''learned the hard way'' how to solve most of the issues they have encountered since moving to North Otago two decades ago.

''There will be some old guy who could have told me, but it's knowing those people ...'' Mr Price said.

In another plan to adapt to local conditions, the Prices are trialling the Balansa autumn-striking annual clover.

''We're trying to find ways of being a dryland specialist instead of a victim of drought.''