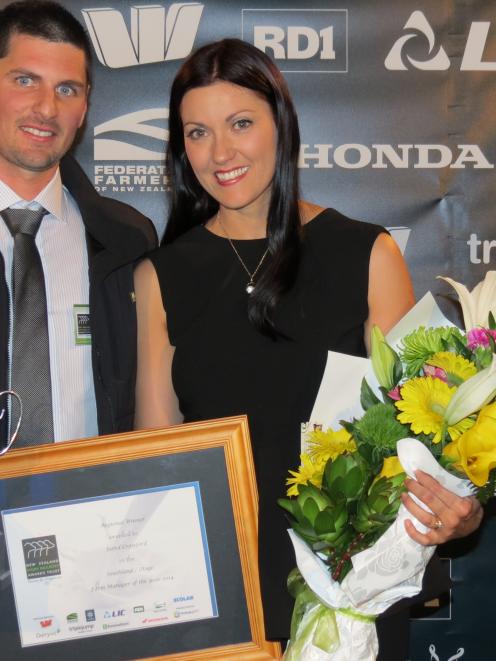 Jared Crawford and wife Sara, of Riversdale, were thrilled when Jared won the New Zealand Dairy Industry Awards Southland-Otago region's Farm Manager of the Year title in Gore recently. Photo by Yvonne O'Hara.
The 2014 Southland Otago Farm Manager of the Year, Jared Crawford, says he was ''shocked'' when he heard his name announced during the New Zealand Dairy Industry awards regional final at the MLT Event Centre in Gore on Saturday.

''I guess we wanted to be winners but it was a bit of a shock,'' Mr Crawford said.

''We are the only managers in the six finalists as the rest were contract milkers.

''We thought that might be bit of disadvantage but we are stoked.''

He said his wife was thrilled.

Mr Crawford manages a first-year conversion 740-cow, 300ha, 300,000kgMS target property near Riversdale for Roger and Tracey Miller and it is the second time he has entered the competition.

He was pleased about the success for his employers as it was their first year in the industry and ''we wanted to show them how wicked'' [exciting and awesome] the industry was.

As he was from a dairy background, they wanted to raise their family in a similar environment.

They have an 11-month-old son Lennox.

They hope to go 50/50 sharemilking in the next year or so, eventually moving to farm ownership.

The Crawfords' field day will be at 160 Waipounamu Rd, Riversdale, on March 27, and they will also be ''tweaking'' their presentation for judging, before going to Auckland in May for the national competition.