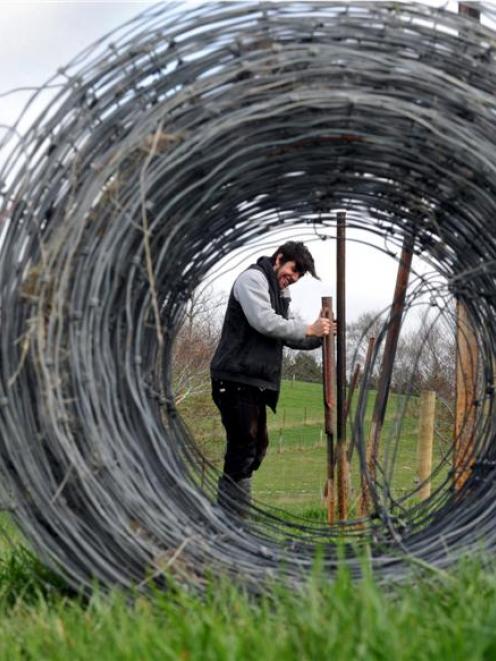 Caleb Unahi learns fencing skills as part of the Farmhand training programme. Photo by Christine O'Connor.
The prospect of getting out of bed at 5am to gain work experience on a dairy farm does not bother Caleb Unahi.

The 19-year-old is enjoying keeping busy as part of the Farmhand training programme, which aims to expose Dunedin's disengaged youth to rural opportunities.

Before starting the 13-week course, Caleb was doing ''nothing much really'', he said.

A family friend encouraged him to apply for the course, which was first held last year.

he said, while learning about fencing at Invermay recently.

He was looking forward to completing the course, getting some unit standards, and pursuing a career outdoors.

''Now I've been working outdoors, I don't think I'll be able to work indoors ever again. It's not the same being indoors ... stuck in an office wouldn't be too good for me.''

Caleb urged other unemployed young people to give the Farmhand course a go.

Jema Shaw (18) was also enjoying learning skills. Her partner recently got a job on a dairy farm in Tuatapere and, when she finished the course, she intended following him south and working voluntarily until she ''deserved a position''.

Eight young people, aged between 18 and 24, were on the course and applications were being accepted for the next intake at the end of February.

Programme manager Annika Korsten, who established the programme on behalf of the Malcam Charitable Trust, described the group as ''pretty awesome, hard working and keen''.

Some changes had been made since last year's course, including adopting a ''staircase approach'' to supporting the students, to ensure the right attitude.

Students would receive the Certificate in Foundation Studies (Level 3) from Otago Polytechnic and some of the credits could go towards NCEA Level 2.

They were mentored along the way.

Work experience was on farms, mostly on the Taieri, while other projects included working in the Sinclair Wetlands and setting up a market garden.

The students will put the basic fencing skills gained under tutor Geoff Allinson, of Cantrain, into practice doing some fencing on Quarantine Island in Otago Harbour this week.

The programme had funding until March next year and Ms Korsten was always keen to hear from people wanting to support it.