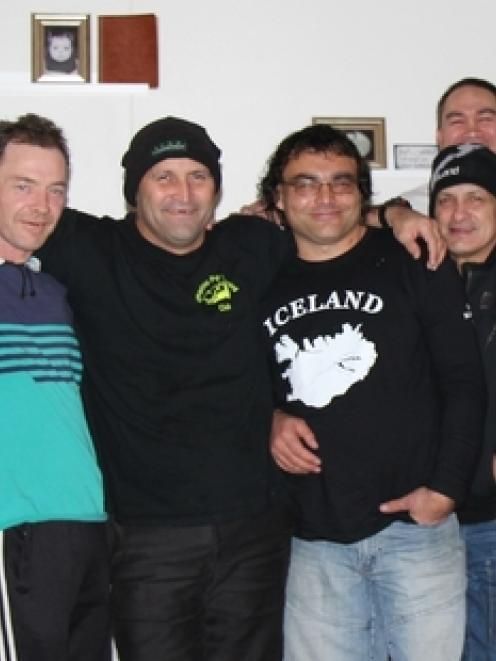 Anthony Russell (fourth from left) says his fellow meat workers (from left) Victor Te Paea, Ross Gibbons, Kaine Saunders, Wayne Hamlin, Shawn Parkinson, Antony Pike and (rear) Aaron Nohakau (left) and John Murdoch at Keflavik Airport in Iceland, are ''the best you can get''.
Commuters stuck in motorway traffic might spare a thought for Anthony Russell's crew of slaughtermen travelling more than 17,000km to work in Iceland each year.

The nine-member team, mainly from Hawkes Bay, are among about 30 New Zealanders whose skills are highly sought-after at six Icelandic freezing works for a brief sheep and lamb processing season before the long northern winter sets in.

Mr Russell has travelled for eight years from Waipukurau to Iceland's northwestern coastal town of Blonduos (population - 811), where he runs SAH Products' single processing chain after hand-picking his workmates for each two-month season.

"They're the best you can get," he said of his team, after arriving home for this country's lamb processing season starting in about a week.

"I don't want to be taking guys who don't know what they're doing - it's not easy over there."

The Kiwis normally fly via Hong Kong, but a cancelled flight from Napier to Auckland this year meant they had to rearrange their bookings for more than two days of commuting via Los Angeles and London.

Although Mr Russell said his men were looked after in Iceland, it was no holiday camp, and the flight disruption meant they arrived just hours before starting work.

"They don't fly us all the way over there for no reason - we were on the chain four hours after we arrived," he said.

SAH slaughterhouse chief executive Gunnar Halldorsson said his company had employed New Zealand workers for the past 10 years, paying about $4000 for each return trip as well as accommodation and meals, and it was one of his best moves.

"Iceland is a very small country and the word spread that they were good workers," he said.

"They're very hard-working, they're not sick - they know it's expensive for them to fly out, and they're popular with the locals."

"It works in really well for our members - they go there in the off-season and it gives them work, so we've encouraged it."

Mr Russell said Iceland was a beautiful but very tough country, where he wouldn't care to live all year.

"If there's a country to be 100 per cent green it should be Iceland - you can drink out of any river there, not like here," he said.

Even the sheep - his crew helped to dispatch 105,000 this season - tasted better from running free of fences, in mountains where they grazed on wild blueberries instead of grass.

- By Mathew Dearnaley and Vaimoana Tapaleao of the New Zealand Herald