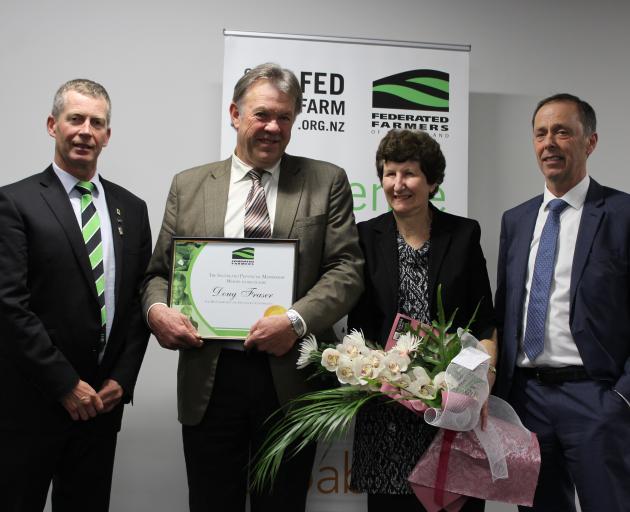 Dedicated to the sector and the people who work in it, for a long time Mr Fraser has been a strong voice in Federated Farmers.

His behind-the-scenes work and advocating for farmers was recognised recently at the Southland Federated Farmers AGM, when Mr Fraser was awarded life membership.

In the late 1980s, when he started with the federation as a young man sitting down the back, Mr Fraser was chairman of the transport and fertiliser committee, Mr Nicholson said.

Six years later, the committee was merged into the agriculture import committee.

''Mr Fraser came over and the rest is history,'' he said.

A strong advocate for farmers, Mr Fraser had been a part of many rate conversations in attempts to get the best for the sector.

''Over the years, a lot have gained value without ever knowing of Doug's contribution,'' Mr Nicholson said.

He had been instrumental in the federation's ability to fight for fairer council rates, he said.

Mr Fraser said he was blindsided to receive the life membership.

It had not all been one way. He had thoroughly enjoyed the fellowship around the executive table, he said.

He always stood on principles, and while sometimes he lost, but more often won, it was the way it went, he said.

''I'm very honoured to be a member of this organisation. It's vital to the survival of our farming community. There's some big challenges ahead of us and we need to be fighting very hard to ensure the equality among all farmers is retained.''

In receiving the award, Mr Fraser also thanked his wife, Jan, who had put up with him being away and at meetings regularly. ''In the years gone by, [she's] supported me time and time again.''