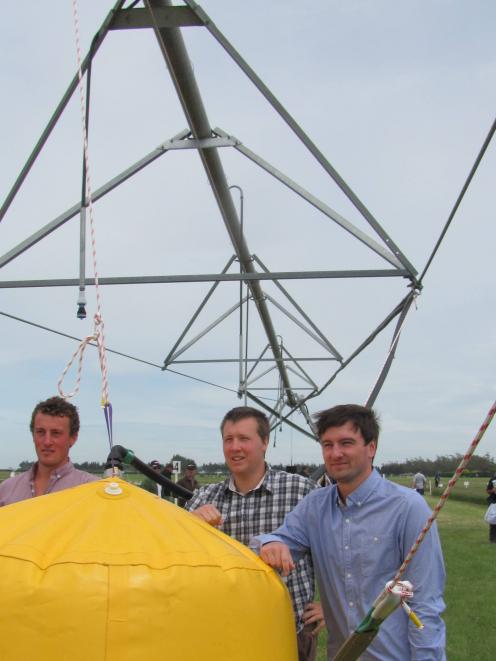 University of Canterbury mechanical engineering students Tom Addis, Raoul Schipper and Matthew Weeber with their water-filled bag invention, designed to stabilise irrigators in high winds. Photo by Maureen Bishop Absent was Ben Wright.
It looks deceptively simple but it has the potential to prevent hundreds of thousands of dollars worth of damage to irrigators.

The large, water-filled yellow bag sitting under an irrigator drew lots of interest when it was unveiled at the CROPS 2014 expo at Chertsey last week.

It was the work of four University of Canterbury final year mechanical engineering students who were given a brief, and funding, from the Foundation for Arable Research (FAR) to come up with a solution to prevent damage to irrigators in high winds.

In normal conditions the vinyl bag would be attached to the top of the irrigator but in severe winds it would be released, filled with 1500 litres of water and lowered to the ground to provide stability in winds of up to 160kmh.

Once the storm was over, the bag would be raised one metre off the ground and the water drained out. The bag can then be raised and reattached to the top of the irrigator.

The idea has been developed in just a few months and its potential has been recognised by lodging an application for a patent.

The students talked with irrigator owners in Canterbury and then considered possible solutions.

The bag was chosen mainly because of its stability on rough ground. It also meant farmers would not need to use machinery to shift irrigators during a storm.

A screw anchor was considered but this put too much stress and force on the irrigator.

Storing the vinyl bag at the top of the irrigator did not damage pasture by adding too much extra weight.

The bag takes about 30 minutes to fill with water and the students are now looking to develop at app which would allow farmers to remotely open the valve to fill it.

Participants at the field day heard that the bag was easy to install and the prototype cost about $1750 to produce. Costs would come down if it was manufactured in quantity.

The bag used had been designed for use by helicopters when fighting fires. Several aspects are still under development and further testing is planned, but already a company has expressed interest in producing the system.

FAR chief executive Nick Pyke said a solution needed to be available as soon as possible at a favourable price.