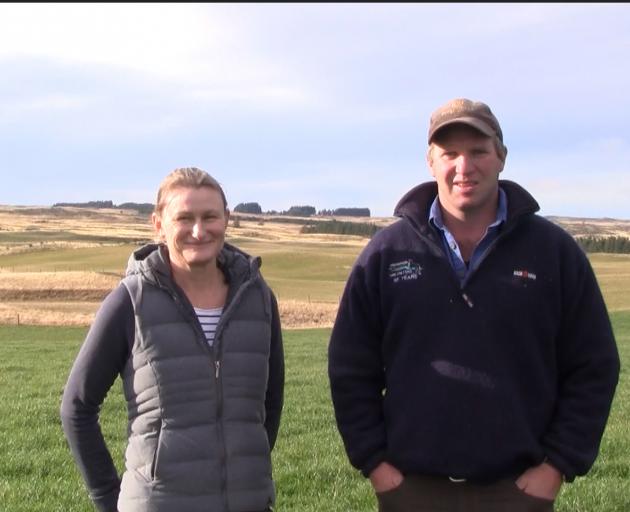 The couple have won the New Zealand Deer Farmers Association Next Generation Award, which recognises their efforts for outstanding performance across environmental, financial and social aspects of their business.

Their win, which was part of the Deer Industry Environmental Awards, was announced at Deer Industry New Zealand's recent annual conference in Wellington.

Mr Mackenzie said the win came as a surprise.

''I didn't have a clue [we were going to win but] was pleased to have won something.''

He said one of their main goals in farming, especially in the deer sector, was to be environmentally sensitive and proactive.

''[We have been] fencing off significant areas of wetlands and various things and just being proactive with that sort of thing - working within our legislation.''

Mr Mackenzie said it was about working within the restrictions of their land.

''We work in long cold winters and hot dry summers, so it's getting the benefit out of that.''

A long, drawn-out winter meant there was a short growing season.

''Then it gets dry, so [we are] working with those environmental challenges,'' he said.

''So to be acknowledged that we are actually getting somewhere with it is good.''

Braemar Station, on the eastern side of Lake Pukaki, covers 4100ha, where the Mackenzies farm sheep, cattle, deer and, as Mr Mackenzie puts it, tourists, thanks to their accommodation business.

They had four houses available - three original cottages and a house they recently built to help meet demand, he said.

Braemar Station is located near the end of the first day of the Alps 2 Ocean cycle trail, which starts at Mt Cook Village and has helped boost demand for accommodation.

While the Mackenzies are dedicated to filling a gap in the tourism market, it was their farming practices that had caught the attention of judges this time round, particularly their deer business.

The Mackenzies have about 730 red hinds that go to the stag.

''The deer progeny - I'm selling all the stag horns at weaning time, and hinds' fawns I take through the first winter. [I] take out my replacements and any others that people buy off me as their own replacements.''

Judges were impressed by the Mackenzies' partnership and ability to work to their strengths, while using complementary skills that fit the farm business.

They also liked Mrs Mackenzie's proactive leadership in encouraging involvement and input into the Mackenzie District Council's plan change 13, along with her courage in taking on speaking engagements.

The judges also liked the Mackenzies' breadth of understanding of farm limitations and praised them for taking opportunities despite the farm's unique and challenging environment.

The 2017 winner of the deer industry's premier environmental award, the Elworthy Award, was Oparau deer farm in Waikato, owned by Steve and Chris Borland and Bob Sharp, of Shabor Farms.