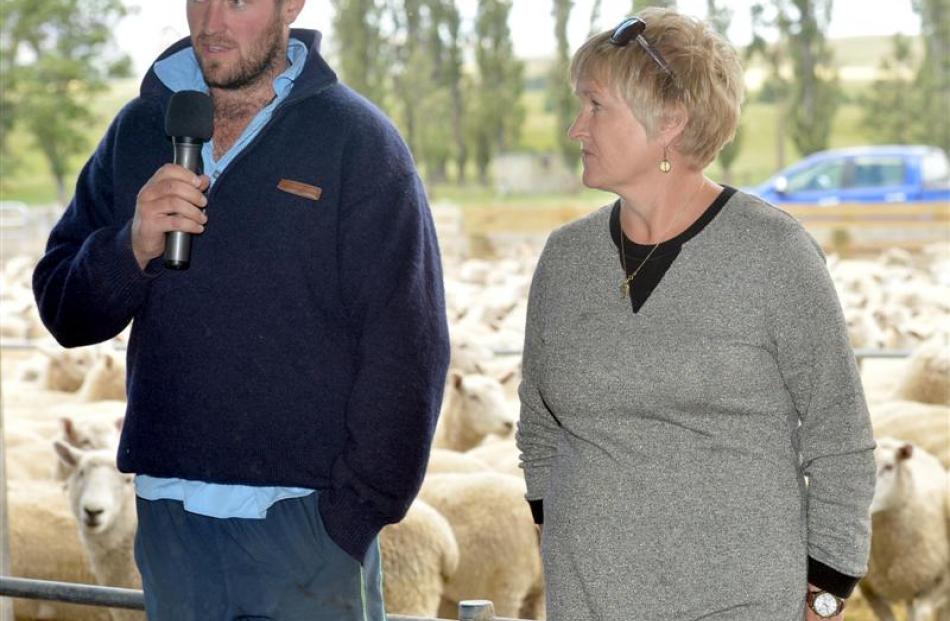 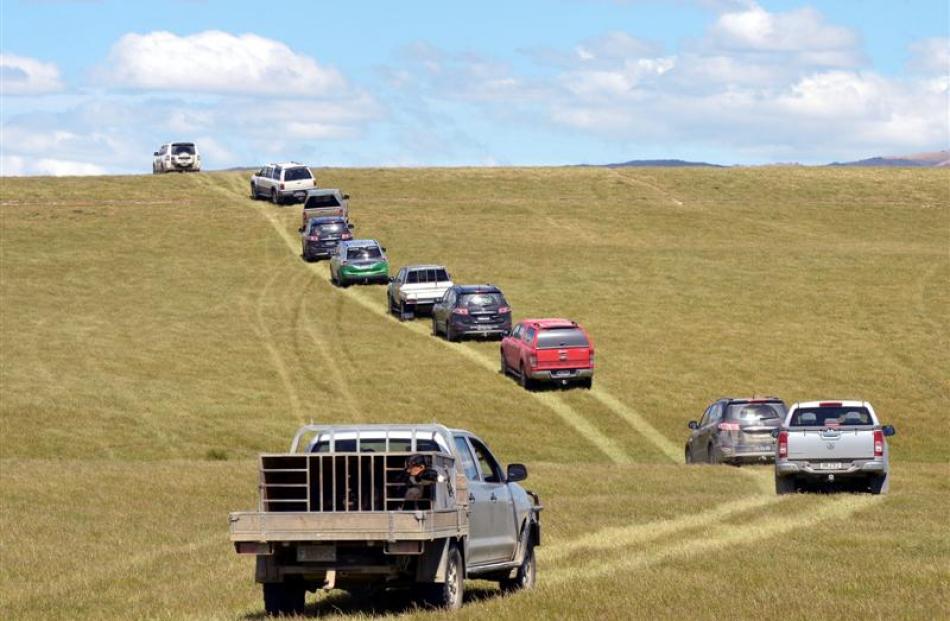 Vehicles wend their way through the Lindsay family's farm. 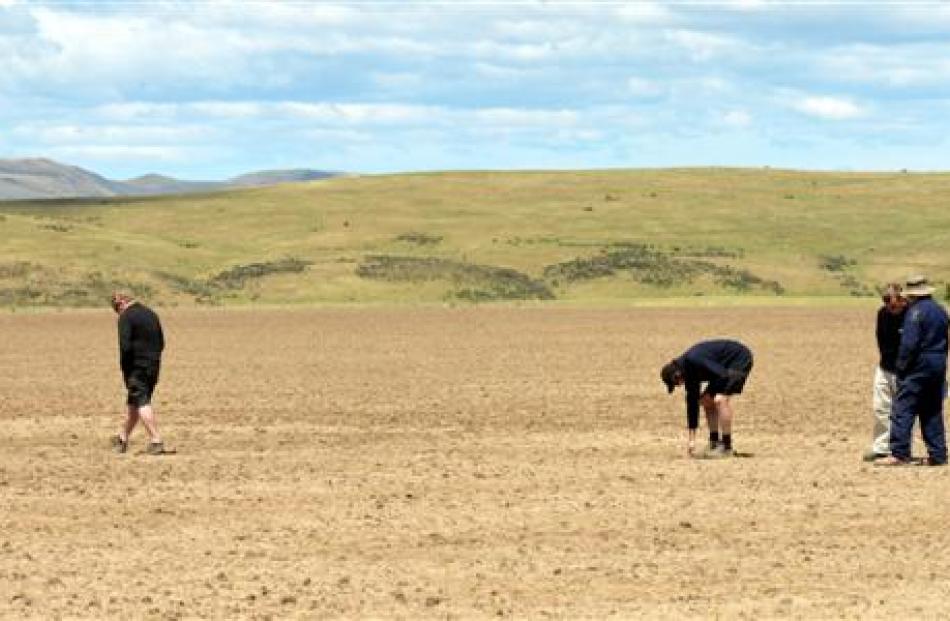 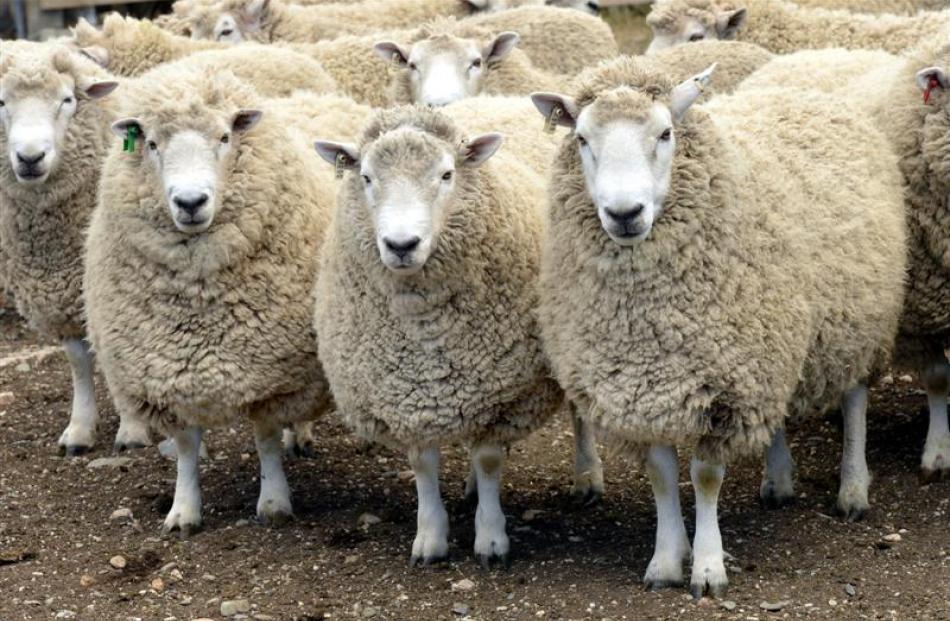 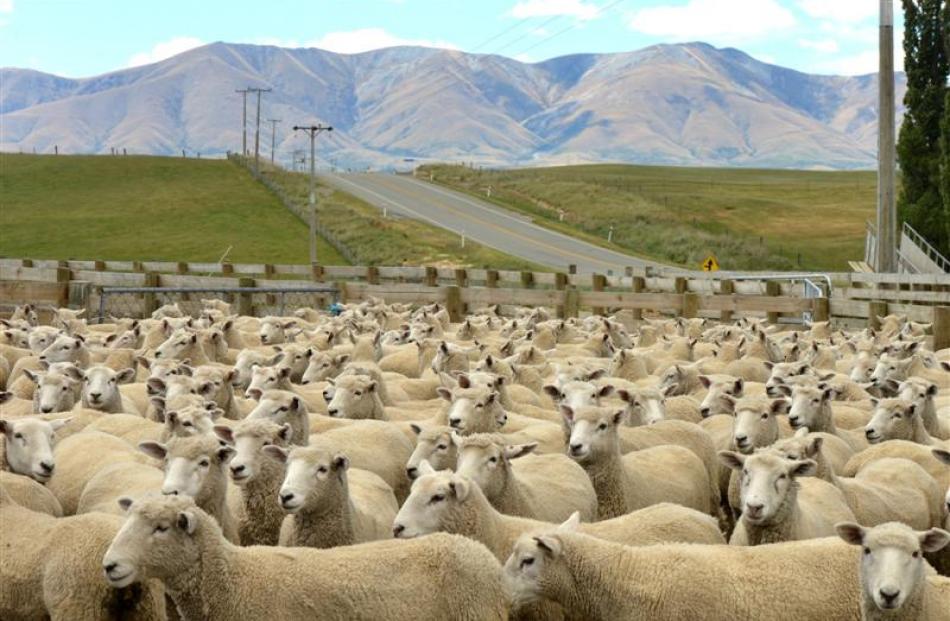 Some of the Lindsay family's sheep on display at the Sir Geoffrey Peren Cup field day in the Maniototo. Photos by Stephen Jaquiery.

When the judges of the Sir Geoffrey Peren Cup competition visited the Lindsay family's farm in the Maniototo, they were impressed with what they saw.

The family was one of four entrants in this year's competition, which is held annually in the region that is hosting Perendale New Zealand's national conference.

A field day was held last week at Creekside Farms, between Kyeburn and Ranfurly, where an impressive farming operation, including extensive development, was outlined.

Creekside's sheep were also on display and Otago Perendale Breeders chairman Fraser Darling said it was a ''wonderful display'' of stock and a real testament to the Lindsay family.

One of the Sir Geoffrey Peren Cup judges, ASB rural manager Luke Tweed, said the four entrants were of particularly high quality and it was a privilege, as a judge, to look over those properties and chat to the farmers.

At Creekside Farms, the judges were extremely impressed with the property and the production that was being achieved.

Numerous lines of Perendale stock had been brought in and were all doing ''extremely well'', which was testament to how they were farmed.

There was also a ''real plan in place''. The family had goals in place, along with methods and systems, to achieve that, Mr Tweed said.

Before 2007, the Lindsay family owned a 220ha sheep farm in central Southland which had been in the family for nearly four generations.

With the increase in dairying and increased land prices, they sold the farm and bought a 2000ha property in the Maniototo in 2011.

They winter the dairy cattle mainly on fodder beet, which is sown under pivot, and they also grow supplementary feed for the cows on farm.

With irrigation, they now have 200ha under pivots, 100ha of K-line and 400ha of lucerne and lucerne mix pastures. There is also 300ha of flood-irrigated land.

All of that made a major contribution to increased stock numbers. They had a ''huge focus'' on becoming more drought tolerant and being able to farm profitably in a dry season, Mr Lindsay said.

When they bought the property, Perendales were already being run on the farm. They had increased ewe numbers by another 3000.

Perendale sires were bought from Richard and Kerry France, of the Hazeldale stud in West Otago. The breed handled the farm and seemed to ''hold their own'', Mr Lindsay said.

All 2-tooth ewes went to terminal black-face sires, with the aim of getting rid of as many lambs as possible, as early as possible. Their goal was to get between 50% and 60% of lambs straight off the ewe to the meat works.

About another six pivots were still to go in.

''They are an expensive bit of metal but they do pay for themselves as long as it's all done for the right reasons,'' he said.

They knew they would get germination ''instantly'' with water, while the income from the grazing dairy cattle was going to fund a new woolshed.

They did not have any breeding cows, preferring to buy in beef cattle, while it was intended to get up to between 7000 and 10,000 cattle grazing. A new set of cattle yards had been built.

DLF Seeds technical manager Gavin Milne, of DLF Seeds, said most of the fodder beet being grown in the South Island had been for dairy cow grazing in winter.

Now there was quite a bit of interest in grazing beef cattle on it, along with sheep. One of the advantages was that it allowed large numbers of animals to remain on small areas of crop, he said.

Fodder beet kept ''extremely well'' in the ground, even after being partially grazed, and it could be kept grazing through to November 1, without any problem.

It was suited to all stock classes of sheep and, while a transition to fodder beet was not as critical as with cattle, he recommended sheep be transitioned for seven to 10 days.

Once that was done, the aim was to feed them as much as they could eat.

When it came to irrigation versus non-irrigation for fodder beet in Central Otago, some crops were followed last year that were sown on dryland, some with partial irrigation, and some fully irrigated.

He would be ''very hesitant'' to recommend complete dryland cropping of fodder beet in the region, saying the main reason was it was a ''lottery'' in terms of whether you got a decent establishment or not.

If there was not irrigation to get reliable germination, there was a ''huge risk'', Mr Milne said.

It was a highly profitable crop under irrigation and one of the most profitable things that could be done with water.

Mr Lindsay was using lucerne for both grazing and hay and silage options.

Lucerne was probably the ideal dryland plant as it was so water-efficient and provided a high-quality feed, Stephen Finch, of Specialty Seeds, said.

When it came to varieties, Australian or New Zealand-bred cultivars were recommended as they tended to fare better than the American ones, he said.