National milk production down by 1.5% 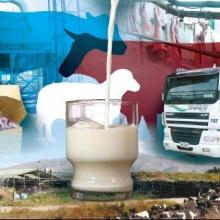 "The South Island now produces 42.7% of national milk solids production, compared with only 31.1% a decade ago," Mr Ellis said.

Within the sharemilker herds, 20-29% sharemilkers decreased by 229 herds (-22%) to 821 and 50:50 sharemilkers declined by 57 herds (-2%) to 2422. Owner-operator herds increased 256 to 8315 herds in 2015-16, reflecting variable order sharemilkers moving to contract milking agreements after financial challenges with low milk prices in recent seasons.

"The number of cows milked in 2015-16 declined 0.4% to just under 5 million, despite a very high number of culled cows during the last two seasons," Mr Newman said.

"This reflects a high number of replacement heifers entering the milking herd in 2015-16, plus some carryover cows being culled. A further decline in the number of cows milked is expected this season."

"However, farmers understand the value of herd improvement and the expectation is for activity to rebound in line with the milk price," Mr Ellis said.