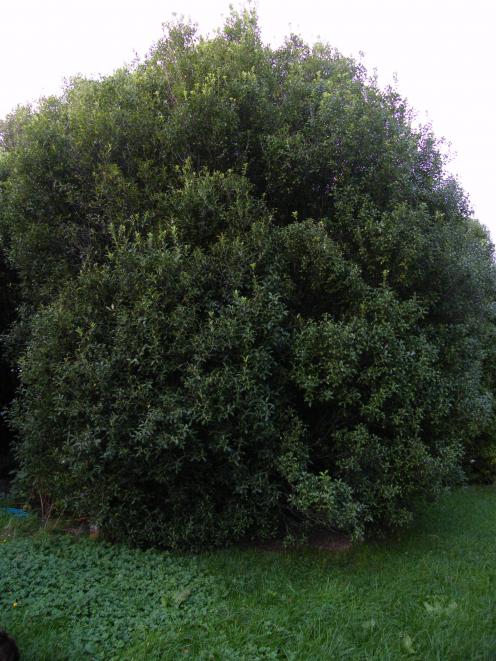 Speaking at the Trees on Farms workshop at Pleasant Point on April 30, Mr Thompson said native species could be used in shelter belts and riparian plantings, for soil stability in creeks and steep areas, for biodiversity, and for aesthetic reasons.

''They look natural and they're there forever.''

Six years ago, concerned by the neglect of native vegetation on farmland, Mr Thompson became a full-time horticulturist and started a native nursery.

''All the work is in the first few years, then they manage and perpetuate themselves,'' he said of native plants.

''They do well in Canterbury under irrigation. Centre pivots provide a great opportunity.''

Flaxes, coprosmas and pittosporums could be planted to provide shelter without interfering with irrigation. Pittosporums would probably need to be trimmed every four to five years.

In shelter belts, natives were almost as quick to establish as introduced species, especially in South Canterbury, Mr Thompson said.

''They do well in wetter areas. They don't fall over.''

Before planting, it was important to get the fencing right, he said. He saw ''a lot of poor decisions about where fencelines go'', sometimes leading to runoff straight into a creek.

''Some fencing just hugs the creek. There's no room for trees for shading.''

Trees that shaded the water could help improve stream health.

Rank grass, twitch and heavy weeds often needed a double spray before planting. He mostly used glyphosate, which was most effective on twitch.

''Sometimes it takes me almost a year to get rid of twitch.''

Farmers should order their plants early.

''There can be a big run on certain plants some years.''

Mr Thompson said he tended to get the biggest plants he could, so they were easily visible when spraying and would grow more readily and evenly.

''I operate on a 90% to 95% success rate. I can't afford failures. My aim in the first year is to have them weed-free. That might involve three sprays. I can basically leave them after that.''

When planting, there should be no potting mix showing above the ground, he said.

He usually spaced the plants 1.5m to 2m apart. The closer they were, the more readily they smothered grass, but that could be a lot more expensive than wider spacing.

''Sometimes groups of plantings are better than big blocks. With natives, they look natural.''

Bigger species such as miro, totara and kahikatea could work well among plantings, Mr Thompson said.