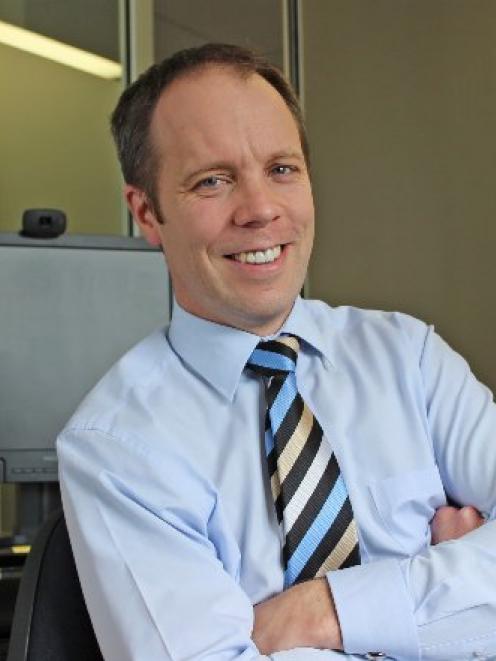 Mr Coup in July took over as chief executive of Deer Industry New Zealand, replacing Mark O'Connor, who stood down after 13 years in the position to run his family-owned investment business.

Less than two months into the role and Mr Coup is excited about the opportunities for the industry, while being realistic about the challenges it faces.

Born in Christchurch, he was a self-described ''city boy'', growing up mostly in Wellington, although both his parents grew up on farms.

After completing a degree in genetics and molecular biology at Victoria University, he joined the New Zealand Dairy Board, initially as a cost engineer.

He worked in a department that worked out how much the board was going to pay dairy companies for the products they supplied.

The job evolved through a few different titles and phases of the board as it moved towards its big restructure.

Prior to that happening, Mr Coup decided it was time for his OE and he headed to London in 1999. Thanks to having an English grandfather, he was able to get a work visa and got a job in private health care.

Following marriage and the birth of the couple's first child, it became apparent to him that London was not the place to be with a young family.

His English wife had been to New Zealand a few times and she was keen to shift, liking the idea of a slower, safer and healthier lifestyle than in London. The family returned to New Zealand in 2005.

He ended up doing some contract work for a consultancy firm in Wellington, before being offered a full-time job.

It was a ''good way to get to grips with the Wellington scene'' and he did all sorts of interesting consultancy jobs, including some back in the dairy industry.

When the opportunity arose for a job at the Meat Industry Association of New Zealand, as trade and economic manager, he jumped at the chance as he was ''mad keen'' to get back into the primary sector on a more fixed basis.

The headline role was around trying to ensure New Zealand meat products could enter markets, protecting access to existing markets and developing access to new markets.

He enjoyed his time at MIA and there was always something happening but, after six years, it was time for a new challenge and the position at Deer Industry New Zealand (DINZ) had much appeal.

The deer industry had been a ''little corner'' of the red meat industry. Within the red meat industry, he could see it as ''a bit of an exemplar'' in terms of its ability to be very proactive and to ''get on pretty well'' with each other, both up and down, and across the value chain.

It was small, innovative and nimble enough that it could get out there and make changes to the way it operated for the better, reasonably readily, he said.

It was also a very young industry and those involved were generally have-a go innovators and risk-takers, who had all seen an exciting new opportunity and were keen to be part of that new industry. In the youthful deer industry, the raw material was only in the very early stages of being moulded in terms of productivity and the potential was huge, he said.

Since starting the job, there had been lots of learning and listening but also a ''fair bit of doing''.

Mr Coup was very excited about implementing a new growth strategy called Passion 2 Profit which sought to lift profit on venison by $2 per kg over 10 years.

The industry had been operating to date on the basis of people being very passionate about their animals and marketing the product, but it also needed to become more methodical about profitability.

In many places, those farming deer were struggling to make it add up compared with alternative land uses. They needed assistance with prices, the tools and the systems.

Venison in many parts of the world where it was consumed in large volumes was considered a game product and eaten during the game season.

The product the New Zealand industry was marketing was ''a lot better than your average game''.

The idea was to raise the product above game and make sure people understood it was a premium product ''in the crayfish category'' and suitable for consumption all year-round.

A lot more needed to be done to communicate market requirements and customer expectations.

There was huge potential, in the terms of people and raw material.

''I'm very optimistic we can move forward and get the sector back in a growth phase.''

The European markets would continue to be very important to our deer industry. Europeans were familiar with venison, enjoyed it and had plenty to spend relative to other nations.

China presented opportunities for venison. Velvet to China was an important market. On venison, the issue was market access. There had been huge growth of sheep meat and beef into China and he would not be surprised, once market access was resolved, to see the same thing with deer meat.

There was no question about his optimism for New Zealand's primary sector. It was ''perfectly placed'' given the demographic of the world and economic change. New Zealand would succeed - what he was concerned about was the deer industry being an ''important part of that equation''.

Mr Coup said the future of AgResearch's Invermay research centre near Mosgiel was on his mind.

The site and the people that worked there had been part of the deer industry ''from day one'' and had made a huge contribution to it. Assuming AgResearch's restructuring proposal should go ahead, DINZ would be seeking to work with AgResearch to minimise the risks for the deer industry and maximise the opportunities.