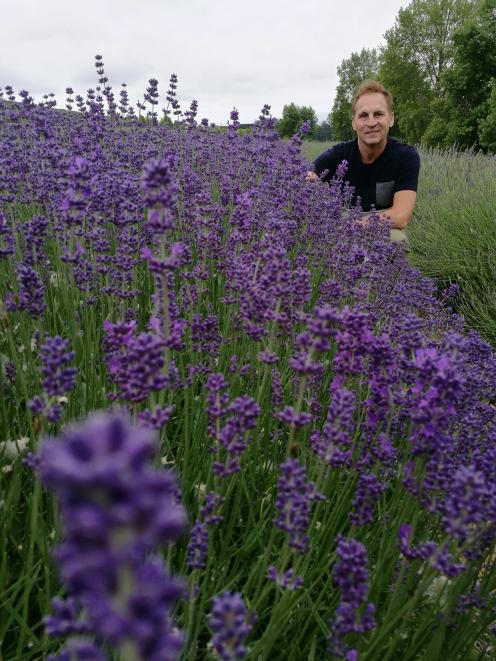 Rob Martin, of Limestone Valley Estate, checks on one of his Pacific blue lavender crops near Cave. Photo: Alexia Johnston
A South Canterbury lavender grower is experiencing an early start to the season.

Rob Martin, of Limestone Valley Estate, near Cave, said his crop of Pacific blue lavender was two weeks early this year, and his other varieties were following close behind.

He put the ''very early'' start down to the year's weather patterns, which were ''excellent'' for lavender.

''[There was a] sudden heavy wet winter and spring and that immediately changed to hot weather,'' he said.

''It's like the plant desperately needs to reproduce before it gets too dry.''

As a result, everything was bigger.

''The flower stems are longer than any other year; the flower, there's 30% more flowers this year than last year, which is just silly,'' he said, of the dramatic increase in growth.

''The plants are vigorous. They are incredibly healthy. I'm amazed.''

Rain last fell at his Taiko Rd property about a month ago, he said.

However, parts of the district welcomed the 32.2mm of rain which fell on Wednesday last week.

Drainage has also added to Mr Martin's challenges as a lavender grower this year.

''Because of the different areas of drainage, different rows are at different stages.''

Last year, Mr Martin's yield from Pacific Blue was 22%, about 5% more than he had aimed for.

''Seventeen percent is a good yield of oil.

''It all depends on how the growing season is and what weather is like when you harvest, but I've found my yields are higher than the average.''

Mr Martin, who has been growing lavender for four years, faced another challenge this year - a stagnant market.

''The lavender growers in New Zealand are having trouble moving their oil due to a combination of market fluctuations and more growers.''

However, because he operated his lavender farm as an offshoot to his other business providing accommodation, he was not too deterred by that challenge.

He planned to start harvesting in the first week of January so was hoping it remained fine until then.

''We've probably had enough [rain] because the initial growth was very strong with the constant rain over winter.''

About 10mm of rain fell on Monday last week, enough to soften the soil before the downpour two days later.