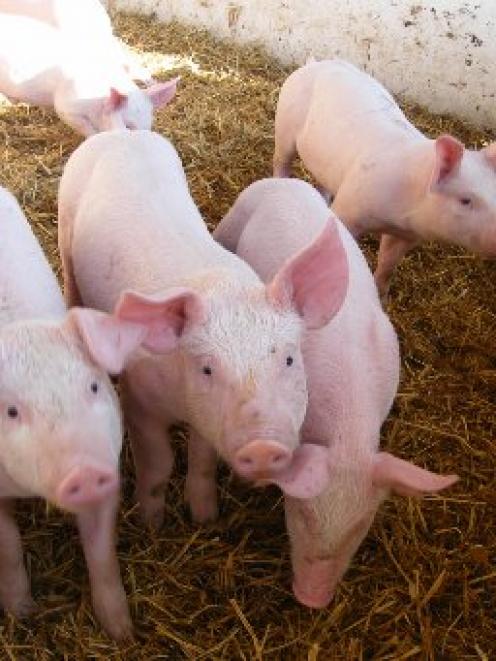 The New Zealand pork industry says backyard pig farmers may inadvertently put biosecurity at risk because many do not know about the precautions which must be taken in care and feeding. The Ministry for Primary Industries says communication and action plans are under way to educate people about the food waste feeding regulations. Photo by Ruth Grundy.
A Ministry for Primary Industries (MPI) spokesman says the ministry has been using various means to educate backyard pig farmers about their biosecurity obligations and the precautions they must take before feeding food waste to pigs.

Mr Pharo said the ministry had developed a new communications plan and action plan earlier this year to implement the recommendations of two audits that were carried out on the food waste feeding regulations.

''Both of these documents were shared with NZ Pork in April.

''Implementation of activities in the communications plan and action plan are under way,'' he said.

''We have had several articles published in print media.

''We have been working with organisations that are popular with lifestyle farmers to get the message out to them.''

Some of the articles that had appeared in print media were: ''This little piggy can't have roast beef'', Wanganui Chronicle, July 4, 2013;

The latter article was shared with NZ Pork, Mr Pharo said. An animated presentation on feeding food waste to pigs had been posted on video-sharing website YouTube and NZ Pork had agreed to post a link to the clip on its website, Mr Pharo said.

''We are working with regional and local councils so they can notify their contacts about the rules for feeding food waste to pigs.

''We know that many food businesses, such as food retailers, restaurants and supermarkets, often provide their food scraps to farms and we have been actively communicating with them.''

The ministry had also sent these businesses a fact sheet on the rules for feeding food waste to pigs.

The ministry has a food control plan template, which was designed to help food business operators comply with food hygiene regulations and develop a plan for their business.

It also had information on food waste feeding regulations, he said.

''Through the plan, food business operators are encouraged to observe the regulations and pass on to ministry the contact details of those collecting food waste for feeding to pigs.''

The ministry is planning a mail-out this month to more than 7000 addresses, identified as having pigs on the property, about feeding food waste to pigs.

It will include a questionnaire to find out to what extent food waste is used for feeding to pigs.

The ministry would be reminding people ''year-round'' to remain aware of the rules on feeding food waste to pigs, Mr Pharo said.

In the event of an incursion, the ministry would use its FarmsOnLine (http://farmsonline.mpi.govt.nz/) database to identify properties with pigs, Mr Pharo said.

Courier Country understands recording personal details on the FarmsOnLine database is voluntary, as is updating the database when information changes.

The ministry said it contacted Ms Brennan in 2007 when it secured services for three months of online advertising which linked to the then Ministry of Agriculture and Forestry website.

A ''feeding pigs food waste'' communications campaign was undertaken in 2007. It included print, radio and web advertising, the ministry said.

Fact sheet: www.biosecurity.govt.nz/foodwaste. There is a link from this site to the YouTube video.