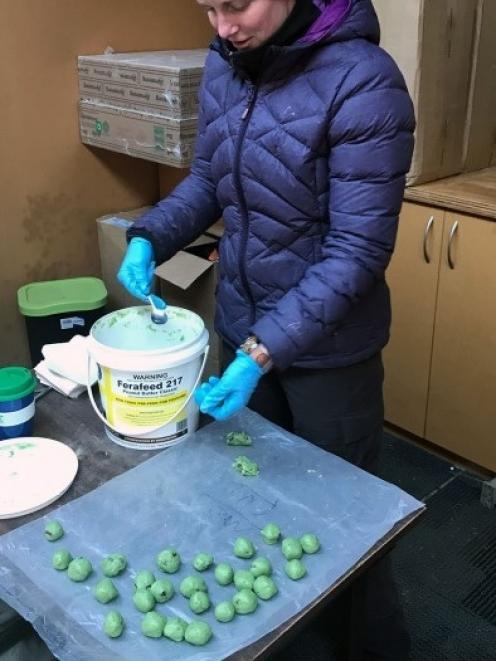 Jenna Hughes-Games makes baits to train wallabies to eat them, before laying poisoned baits. Photo: Supplied
Waimate's wily pests are about to be tempted with lethal treats.

Green balls flavoured with peanut butter are being placed on stakes in remote Mackenzie district hill country, where they are likely to appeal to the Bennett's wallaby population. The third batch, following two deliveries of non-toxic balls about a week apart, will contain cyanide that produces a quick death after being eaten by the marsupials.

The project is part of Environment Canterbury's biosecurity work to reduce pest numbers.

Bennett's wallabies were introduced from Tasmania into the Hunters Hills near Waimate in 1874 as a curio. Their population boomed and, by the 1950s, they were a substantial pest. Because wallabies breed from the age of 2, they can quickly repopulate an area.

''Using the baited balls is a new approach, which we have developed in conjunction with Otago Regional Council, in order to target a specific new area where wallabies have now been detected.

''These pests cause devastation to forestry plantings, native bush regeneration and other biodiversity, as well as impact on farming when they eat valuable pasture and damage fencing.''

Biosecurity officer Jenna Hughes-Games has been making batches of about 450 bliss balls from a paste.

''It can be a little bit time-consuming, getting all the balls just the right size for the wallabies, but it's worth it if it helps reduce their numbers in this target area outside of our wallaby containment area,'' she said.

The project's start was delayed by the cold, wet winter but now the snow had cleared the ECan team hoped to see results by the end of spring.

Signage installed in the distribution area would remain in place for several months.

ECan has a 900,000ha containment area for wallabies, but they have become established in Mount Cook, south of the Waitaki River, and on the Benmore range. There have been sightings as far afield as Marlborough and individuals destroyed in Naseby and Ranfurly.

''People should be aware that capturing, holding or removing wallaby from the containment area is illegal, with high fines imposed on those prosecuted,'' Mr Glentworth said.