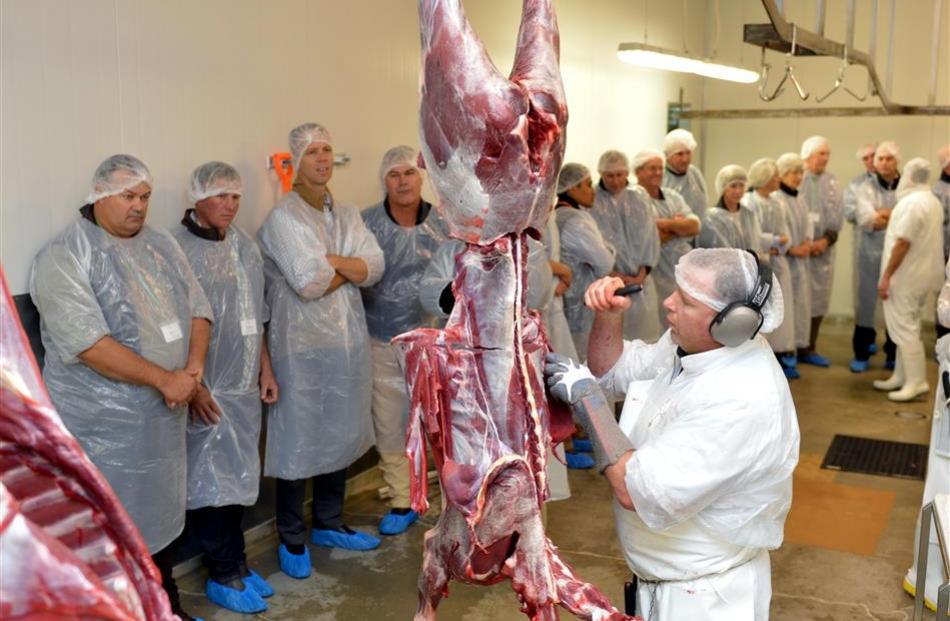 Chris Anderson bones a deer carcass at Duncan South. The cuts are destined for US and European orders. Photo by Stephen Jaquiery.

The company, previously known as Duncan and Co, bought out the other shareholders of Otago Venison 18 months ago, to become the sole owner of the Mosgiel-based processing facility.

Mr Tyrrell, who has been involved with venison marketing for 30 years, told those attending the recent deer industry conference in Dunedin that the outlook was "very positive''.

There was also opportunity behind the farm gate, the Passion2 Profit programme, and the Cervena project, involving five companies working collaboratively, using Government funding, and "really trying to make a difference'', moving away from the seasonal European market.

Duncan New Zealand's vision was about creating a sustainable future for New Zealand and it believed it could create a market-leading brand.

It had some very strong customers in certain markets and was seeking to grow in other areas, Mr Tyrrell said.

Increasingly, farmers wanted to be involved beyond the farm gate.

They wanted to be connected to markets and customers, they should be committed to a processing and marketing partner, and they should be rewarded for that commitment, he said.

Seventy percent of New Zealand venison went to EU countries and that was still seasonal, which was an issue.

Ten percent went to the United Kingdom - that had doubled in the past 12 months - and 14% to the United States, which was New Zealand's second-largest export market and largest chilled market.

The industry was growing away from Europe, although Europe remained "still by far'' New Zealand's largest leg market.

It was sad that "quite a few'' farmers had left the deer farming community.

Hopefully, it was getting to the point where that would stop and the industry could build for the future, Mr Tyrrell said.

Duncan New Zealand has two plants, one at Rotorua and Duncan South, which is opposite AgResearch's Invermay campus.

Chief executive Andrew Duncan is based at Whitford, near Auckland, along with five staff, including its logistics and administration.

Mr Duncan was at Duncan South last week to show deer conference-goers around the facility which was originally built in 1979 to provide the capability to slaughter sheep, cattle, deer or goats for agricultural research.

Capability and capacity was expanded in 2001 when a purpose-built boning room was erected.

It now had the capacity to process about 200 deer a day, although did not at present as this was a quieter time of the year.

The high-production period was October through to March, Mr Duncan said.

He agreed the outlook for venison was very good and, although there were challenges over the lower kill, as farmers were starting to grow their herds, that was a good problem to have.

The challenge was to make sure marketers did not overcommit, he said.

Mr Duncan was very pleased with the Duncan South operation, which employed about 35 staff, saying it was being managed very well.