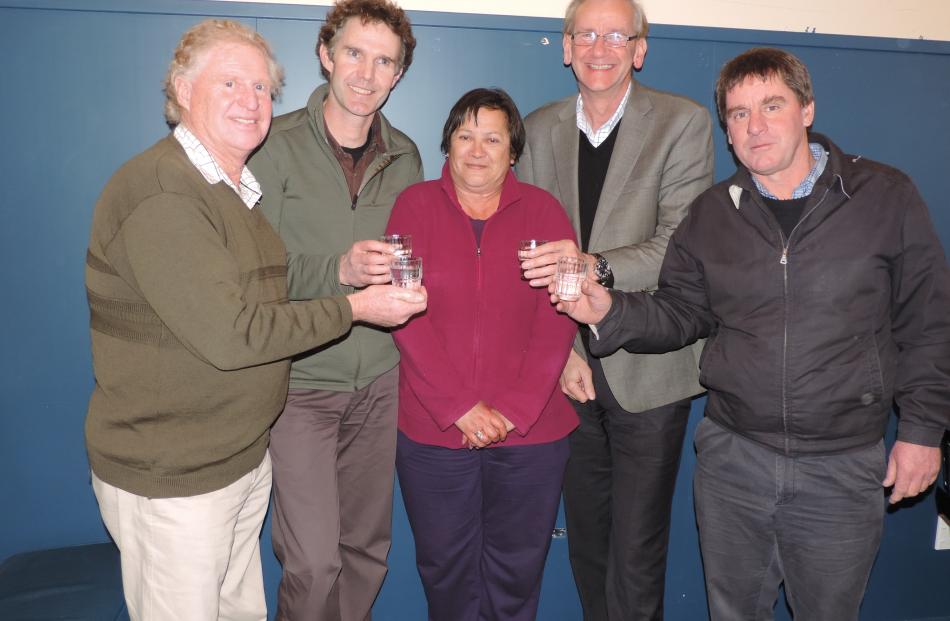 Toasting the success of their water quality agreement with glasses of water are (from left) Lower Waitaki- ...

Compromise and co-operation are being hailed as the main ingredients in a South Canterbury agreement on nitrogen limits.

Farmers in the Lower Waitaki-South Coastal Canterbury catchment had asked their Environment Canterbury zone committee for more time to work on allocating nitrogen emissions, within the maximum already set to meet the goals of a healthy environment and vibrant economy.

Since February, the farmers have held more than 10 meetings, with ECan supplying technical advisers. After fearing they would not agree, they eventually did.''

Everyone had to give a bit. We've got a really good consensus.''

Mr Hurst, who led the farmer meetings, said ''the spotlight was on us nationwide - it was a new way of doing it''.

Based on soil types, farmers in the Waihao Wainono area would be allowed to emit up to 10kg of nitrogen per hectare a year. In the Northern Streams area, they could emit up to 15kg.

When the Wainono Lagoon was augmented with extra water from the proposed Hunter Downs irrigation scheme, or through some other source, the Waihao Wainono farmers would be allowed to increase their nitrogen emissions up to 15kg.

All farmers had to adopt ''good management practice''. They would be able to set up formalised collectives to average emissions across their properties within subcatchments, provided none exceeded the maximum.''

We're drawing a line in the sand, saying high-emitting activities on light soil is not on,'' Mr Hurst said.

Last Wednesday, the agreement was presented to the zone committee's meeting in Waimate. Applause erupted from the public gallery when it was accepted unanimously.

The agreement will be presented to ECan tomorrow and, if approved, signed off by its commissioners on August 7.

Federated Farmers national president William Rolleston, a South Canterbury farmer who attended the Waimate meeting, said the outcome gave all farmers opportunities. It did not undermine the activities of the high emitters or the land values of the low emitters.

Zone committee chairman and Glenavy farmer Robin Murphy said he was ''really thrilled how the total community got together to work out how it's going to happen''.

''These are exciting times.''

''If we've got something wrong, I hope we're big enough to sort it out. It's a real opportunity.''

ECan commissioner and zone committee member Tom Lambie said he envisaged the process used in this case becoming a template for other parts of the district.