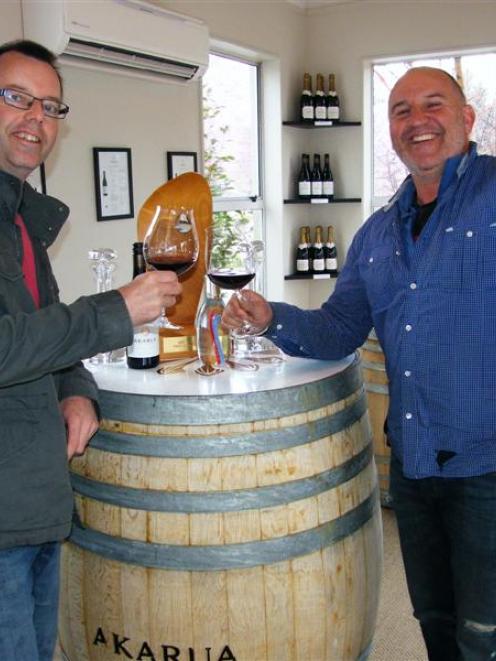 Hidden in the rolling hills of Bannockburn, off the twisting tarseal of Cairnmuir Rd, lies the Akarua vineyard.

A 50ha expanse of north-facing hillside and terraces is planted with pinot noir, pinot gris and chardonnay grapes.

Or as winemaker Matt Connell puts it - ''a very special piece of dirt''.

That special piece of dirt came up trumps at the Romeo Bragato Wine Awards late last month, as the winery's 2011 pinot noir won the champion wine of show, champion pinot noir and sustainability trophy awards, while its rose brut non-vintage won the award for champion sparkling.

The wines are a product of the working relationship between Mr Connell and vineyard manager Mark Naismith.

''It's like a marriage between me and Mark,'' Mr Connell says, before both realise what he has said and burst into laughter.

Despite Mr Naismith's reservations about any rumours the pair may have started, he agrees.

''The important thing is both the grower and winemaker being on the same page in what we are trying to achieve,'' Mr Naismith says.

Mr Connell has been a winemaker since 2005 and joined the company in 2008, while Mr Naismith started working in the industry in 2002 and worked his way through the ranks before joining Akarua as vineyard manager last year, bringing with him a wealth of knowledge about bio-dynamics, some of which Akarua is now incorporating.

''That's one of the strengths of the company,'' Mr Connell said.

While the company prides itself on ''being a leader and not a follower'', many of its practices are not unique to the company, Mr Connell says.

Mr Naismith says every decision is made with the fruit Akarua's vineyard produces in mind.

''Everything we do on our vineyard, everyone else does to varying degrees,'' Mr Naismith says.

''But we do it in a way that we feel will reflect our place in a specific way.

''Mr Connell says the strength of Akarua's wines lies in the fact the site produces such good grapes.''

We are unique in the sense that we are the only people farming on this 50ha,'' Mr Naismith adds.

Mr Connell says Bannockburn is seen as a ''grand cru'' region for wine growing and that is reflected in the wine the vineyard produces.

''We are trying to make ultra-premium wines,'' he said.

From the vine to the bottle, the company tries to infuse the qualities of the land the grapes are grown on into the wine as much as possible.''

We have our own unique aspects and flavours from this site,'' Mr Connell said.

''It comes down to what we do in the winery and we try to do as little as possible. There's no secret to that - having great wine comes from growing great grapes.''

The pair say the vineyard's team is essential in that regard.

As the ''eyes and ears'' of the vineyard, those who work under Mr Connell and Mr Naismith play an essential role in making sure Akarua produces wine the company can be proud of, Mr Connell says.''

In a bottle of wine there's a million decisions that have gone into that wine,'' he says.

''Right across the process, we are totally quality-focused.''

While he is pleased with the company's success, it also bodes well for the whole industry, Mr Connell says.

''The wine industry is going through pretty tough times at the moment, but Central Otago is seen as the brightest star.''