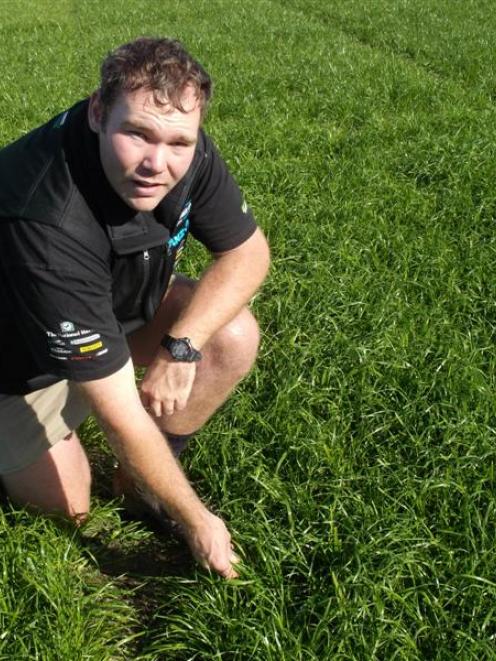 As he prepares for the 2014 ANZ Young Farmer Contest Tasman regional final, to be held at the Murchison A&P Show on Saturday, February 15, Mr Carter is working for AgriSeeds in Hamilton. But he said his heart remained in Canterbury.

''The red and black's not going to go out of the veins just yet. Canterbury offers a lot of opportunities for dry stock and cropping, so it's where I want to look to be farming in the future.''

Mr Carter, who finished fourth in last year's grand final after winning the Tasman regional final, was born and bred on a 600ha sheep and beef farm at Opononi in Northland. He moved to Canterbury four years ago to pursue a Bachelor of Agriculture degree in plant production at Lincoln University.

Winning a Young Farmer Contest grand final has been his dream since a young age. He first got involved in the contest when he turned up to watch his local district final in Northland seven years ago.

''They were short on numbers, so I decided to compete and I ended qualifying for the regional final on my first attempt.''

Mr Carter predicted this year's Tasman top four would comprise himself, fellow Christchurch finalists Sarah O'Connell and Caleb Strowger and Nelson-Marlborough finalist Andrew Wiffen. ''Sarah's very good. We competed against each other three years ago in the regional final, so I know she is going to be a strong contender.

''My old flatmate Caleb Strowger has been in the Aorangi regional before and he was in the Tasman final last year and he helped me prepare for the grand final last year, so he knows a few of the trade secrets.''

''It is a very competitive field this year, so I'll definitely need to do the work. It's going to be a real challenge and I'm looking forward to it,'' Mr Carter said.

''I competed against James two years ago in the North Canterbury district final. He takes a very academic approach and having grown up on a dry stock unit he will be very tough to beat.''

No Hurunui YFC member has won a regional final since Scargill Valley and Beef and Lamb New Zealand northern South Island director Andy Fox won a place in a grand final back in the 1990s, but Mr Hoban and club mate Charles Douglas Clifford were hoping to change that.

''It's nice to have two Hurunui club members in the final and it is good for the club,'' said Mr Hoban, who considered himself ''the rank outsider''.

''As long as I give it my best shot and do some hard work, I'll be happy. I've got two or three years left so I'll treat this as a learning experience and hopefully give it a better go next time.''

Eight finalists representing the Christchurch, North Canterbury, West Coast and Nelson-Marlborough districts will be competing for a place in the grand final in Christchurch in July. For more information and the latest results go to: www.youngfarmercontest.co.nz