Getting connected to the tech experience 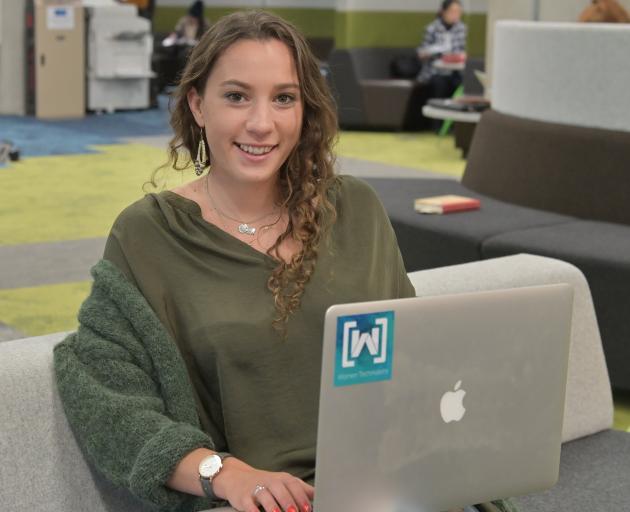 Elora Chang is passionate about building a supportive network for women within technology in Dunedin. PHOTO: LINDA ROBERTSON
When it comes to having connections in the tech world, they do not come much bigger than Google.

Last year, Ms Chang (22) received a Google Women Techmakers scholarship, one of 70 awarded from a field of 25,000 people from 14 countries throughout the Asia-Pacific area.

This Wednesday, she will share her experiences of visiting Google HQ and give an insight into what it was like as a young woman entering the tech industry.

Ms Chang is co-hosting a Women in Tech event from 3pm until 5.30pm at Signal ICT Graduate School, as part of Dunedin Techweek.

They will share their journey into tech and the challenges they had overcome to be where they are today.

That will be followed by a panel discussion, hosted by Ms Chang, discussing topics concerning diversity within the technology realm, how to continue to expand the capacity of technology within Dunedin, and how to build a supportive network for women within technology in the city.

Originally from Nelson, Ms Chang moved to Wellington after leaving school and "dabbled" in technology before returning to her home city.

She starting a small cooking school and catering business with her sister, Chelsea, called Madame Lu’s.

Ms Chang, who has always loved technology, created an online meal delivery service for about six months and then got into online content creation for various food-related businesses.

That led her to move to Dunedin several years ago to pursue her tertiary studies, although she continued to be involved with Madame Lu’s, doing the web, marketing and tech side of it.

Being presented with the Google scholarship in Singapore, among young women from the likes of Afghanistan, India, Japan and South Korea — and only one of two New Zealanders — was "the most incredible experience ever".

When she initially found out she had been awarded the scholarship, the news came as a "huge shock".

She thought her interviews had gone "terribly" and she did not think she had the credentials.

Even as she was preparing to leave for Singapore, she had not told people, as she did not feel she deserved it.

Ms Chang was passionate about building a supportive network for women — both new and established within tech — in Dunedin, and encouraging younger girls to study technology.

She had been working with Kylie Jackson from Signal ICT Graduate School to build that network, and working within the university.

It was frustrating there was still a "huge gap" where women were concerned in the tech sector which was heavily dominated by males.

It was also very hard to encourage women to embrace it and support each other, which she had been trying to do.

Ms Chang was excited about the Women in Tech event and, just because it was women speaking, that did not mean men could not attend.

They would be welcomed as it was "not just about women" but about diversity and ethnicity within the tech sector and how to make it inclusive, she said.

Ms Chang still had several years of study ahead and she had not quite decided what she wanted to do after, as she tended not to plan too far ahead.

There was the possibility of working for a big company such as Google — she now had very good connections through the scholarship programme — and she was also interested in small startups.

She loved the creative side of tech and believed most people did not realise how team-based it was.

She loved being surrounded by other people and working with them towards achieving a goal.

Ms Chang also really enjoyed Dunedin, and the city’s environs was one of the driving factors of her move south, rather than to a main tech hub such as Auckland or Wellington, the keen surfer and skier said.

That was another angle she wanted to focus on: how to increase the capacity of tech so there were more jobs for young people to stay in Dunedin which was "such an awesome place".

Dunedin Techweek begins on Monday and features more than 40 events.

Dunedin’s tech sector generates about $330million to GDP and provides more than 2000 jobs.

Medtech: Good for the world?

Ian Taylor, Tim Packer and Pete Hodgson discuss how new and emerging technologies could be best utilised in the Dunedin Hospital rebuild and the proposed Dunedin harbourside vision.

Designing Solutions for the 21st Century

In this interactive workshop, the Britten Institute welcomes the opportunity to challenge the way products and services that meet 21st-century needs are designed. This is not all about clever technology but about meeting the demonstrable needs of people, planet and profit.

Cadbury owner back in black, but Covid cautious