Brendan Baird is known for his attention to detail. Photo: Peter McIntosh
A special event is being held at the South Dunedin Community Hub next week, when 21 staff from Cargill Enterprises will graduate from a programme in workplace communication, literacy and numeracy. Sally Rae pays a visit to Cargill Enterprises and discovers a very special place.

Colin Walters has his speech prepared for his graduation ceremony next Wednesday.

It might not be written down but Mr Walters (54) does not need words —  it is all in his head and he is looking forward to speaking on behalf of his fellow graduates. One of his goals was to improve his public speaking and having done that,  he thought it was the perfect opportunity to utilise his new skills.

The graduation ceremony is for 21 Cargill Enterprises staff members who have completed a one-year programme in workplace communication, literacy and numeracy and it will have all the pomp of a traditional graduation. 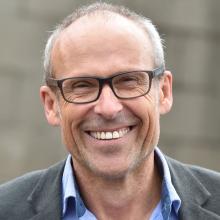 Cargill Enterprises chief executive Geoff Kemp.
Gowns have been loaned by Otago Polytechnic, a photographer has been organised, family and friends will attend, and two special guests will present the certificates at the South Dunedin Community Hub.

Each graduate will receive a dictionary funded by  the Dunedin Central Rotary Club and a $50 Whitcoulls voucher from the Marsh Family Trust.

"Our successes are small steps, not grandiose, but for us, they are just as important. A graduation here is  equally as important to our staff as a graduation anywhere through the polytech system," Cargill Enterprises chief executive Geoff Kemp said.

For most taking part in the on-site, one-year programme, it was the first time they had studied as an adult. Some of the older learners were placed in institutions as children and so had little or no childhood education,

The programme was the first of its kind in the country but  now three other social enterprises were doing the same. It was funded through TEC’s employer-led workplace literacy and numeracy fund.

Set up more than 50 years ago, Cargill Enterprises  employed 88 people with disabilities and, over the past four years, it had  moved into being "quite commercial", Mr Kemp said. 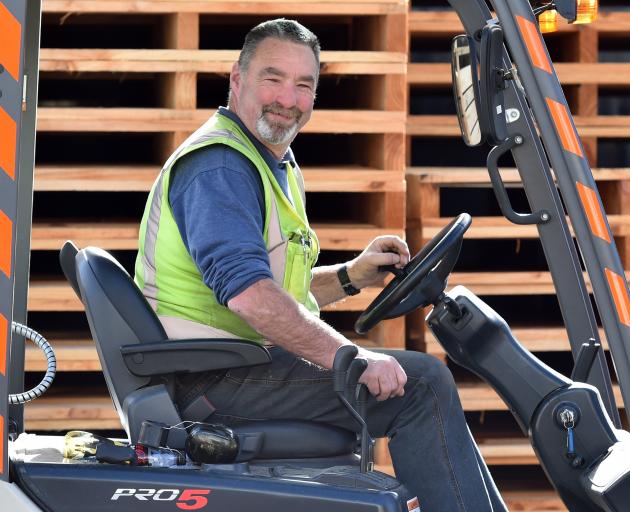 The non-profit organisation has turned around from insolvency to operating with a surplus and would probably finish the year with a turnover of close to $2 million.

From an engineering background, Mr Kemp was on the board of Cargill Enterprises when he was asked if he would consider taking on the CEO role.

He spent the first three months buried in every detail of the business —  money in, money out, cashflow, contracts, and bringing in each contractor to talk openly about the business enterprise’s  dire financial situation.

Commercial thinking had to be adopted for what was a "real workplace".

"This actually is a business — it needs to be accountable, transparent, effective," he said.

There were expectations of people’s work commitments and work ethics, because the goal was to get people "work ready". 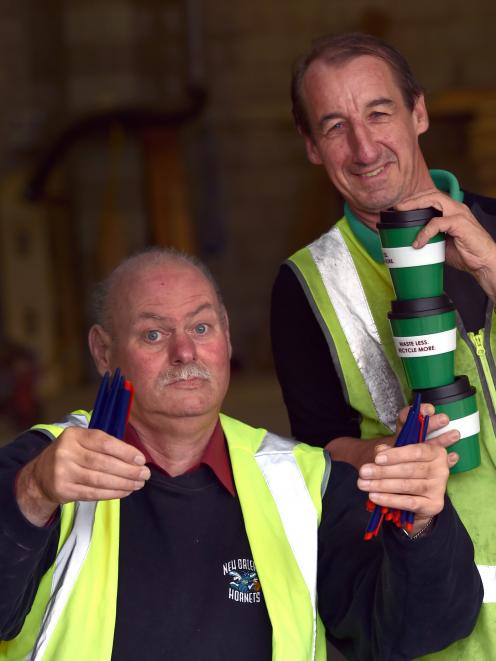 Alan Wood (left) and Colin Walters display some of the promotional work they do.

"It’s really as close as we can bring it to a typical workplace," he said.

It is a busy, bustling, happy workplace with  a wide variety of work going on behind the facade on Hillside Rd.

A growing area was online businesses supplying products to be packed and dispatched. For the e-waste work, the University of Otago was its biggest customer while members of the public also dropped off surplus computers to be dealt with.

It had been so busy Cargill’s had  been turning work away, Mr Kemp said.

Cargill Enterprises wanted to give people with disabilities options  and that was where the numeracy-literacy programme had been developed from.

Two years ago, it was discovered  some staff wanted to improve their numeracy, literacy and computer skills.

Various "self-directed"  programmes were tried but they did not work because there was too much emphasis on the individual driving their own development.

Coincidentally, Ms Franklin, who had moved from Auckland to Dunedin, had  a background in adult education, specifically in teaching people with learning disabilities.

In the Southern city she found a lack of further education opportunities catering for adults with learning difficulties so she started some learning programmes in the community before approaching Cargill Enterprises and contracting to it.

All on the course had achieved at least one unit standard;  topics covered included health and safety, teamwork and form-filling.

Participants also had personal goals they had to achieve, whether that was buying something on their own from a $2 shop, reading a bus timetable, or a computing goal — some had never touched a computer mouse before. They also had to come up with an idea for improvement at their workplace and ideas included a suggestions box, newsletter and soft plastics recycling. Mr Kemp said the confidence being built had changed the environment. Staff had confidence to ask questions and to be involved with things like health and safety.

Mr Kemp was in his office one day when he heard "whooping and hollering" from the cafeteria where education was done on computers.

An employee had achieved a certificate — possibly the first in his life — and he was hugging the tutors in excitement.

Former Cherry Farm patient Alan Wood (54) has spent 10 years at Cargill Enterprises. Taking the course meant he was able to read his mail and write his name and address on a computer.

He had bought books and got a library card — he enjoys browsing books about cars, trucks and motorbikes — and he had also been practising his counting at night.

Colin Walters (54)  learned  how to communicate and how to count better. He came up with the idea of a monthly newsletter and sourced items for it.

He hoped to turn it into a proper newsletter but said he was kept very busy in his job so did not really have the time.  Other comments from participants included they talked more at work, asked for help, learned to put capital letters for names and spaces between words, learned how to  handle conflict and upsets at work better, got better at multiplying and dividing and were not so shy now.

Mr Kemp said the "elephant in the room" was the minimum wage. The Ministry of Social Development provided some financial support and Cargill Enterprises worked on a minimum wage exemption permit. It aspired to equal pay for work of equal value.

There was an "ideological voice" that said "if you employ somebody in the country, you have to pay the minimum wage". However,  it was about finding a model that worked —  that was uplifting and empowering for people with disabilities, he said.

Staff received a supported living allowance as well as what they earned. That was done through an independent assessment process monitored by the Ministry of Business, Innovation and Employment.

The next stage, for which there had already been discussions with Winz, was to set up  a model for young people who had been unemployed for two years so they could come for a 10-month contract to provide  them with work readiness.

There was a high youth unemployment  challenge in Dunedin. He reckoned in two years’ time there could be 150 people at Cargill Enterprises, and he believed the inclusion of young people would mean a healthy mix  make it more inclusive.

"We have to care for everybody in our city. When you do a barometer on the wellbeing of your city ...  that’s why I think this place is worth fighting for and is important," Mr Kemp said.