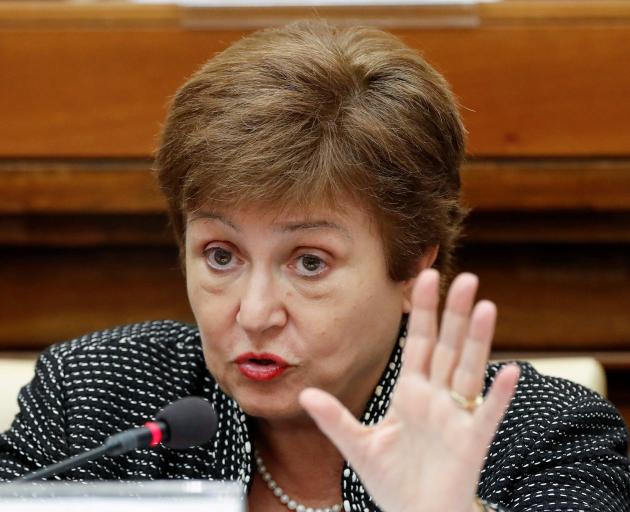 Kristalina Georgieva: 'We are in very choppy waters". Photo: Reuters
The head of the International Monetary Fund says the  outlook for the global economy has "darkened significantly" since April and could not rule out a possible global recession next year, given the elevated risks.

IMF Managing Director Kristalina Georgieva told Reuters the fund would downgrade in coming weeks its 2022 forecast for 3.6% global economic growth for the third time this year, adding that IMF economists were still finalising the new numbers.

The IMF is expected to release its updated forecast for 2022 and 2023 in late July, after slashing its forecast by nearly a full percentage point in April. The global economy expanded by 6.1% in 2021.

"The outlook since our last update in April has darkened significantly," she told Reuters in an interview, citing a more universal spread of inflation, more substantial interest rate hikes, a slowdown in China's economic growth, and escalating sanctions related to Russia's war in Ukraine.

"We are in very choppy waters," she said. Asked if she could rule out a global recession, she said, "The risk has gone up so we cannot rule it out."

Recent economic data showed some large economies, including those of China and Russia, had contracted in the second quarters, she said, noting the risks were even higher in 2023.

Investors are growing increasingly concerned about recession risks, with a key part of the US Treasury yield curve inverted for a second straight day on Wednesday, in what has been a reliable indicator that a recession is looming.

Federal Reserve Chair Jerome Powell last month said the U.S. central bank was not trying to engineer a recession, but was fully committed to bringing prices under control even if doing so risked an economic downturn.

Georgieva said a longer-lasting tightening of financial conditions would complicate the global economic outlook, but added it was crucial to get surging prices under control.

The global outlook was more heterogeneous now than just two years ago, with energy exporters, including the United States, on a better footing, while importers were struggling, she said.

Slower economic growth may be a "necessary price to pay" given the urgent and pressing need to restore price stability, she said.

Georgieva cited a growing risk of divergence between fiscal and monetary policies, and urged countries to carefully calibrate those actions to avert any chance of fiscal support undermining central bankers' efforts to control inflation.

"We need to create the same strong level of coordination between central banks and finance ministries so they provide support in a very targeted way ... and don't weaken what monetary policies are aiming to achieve," she said.