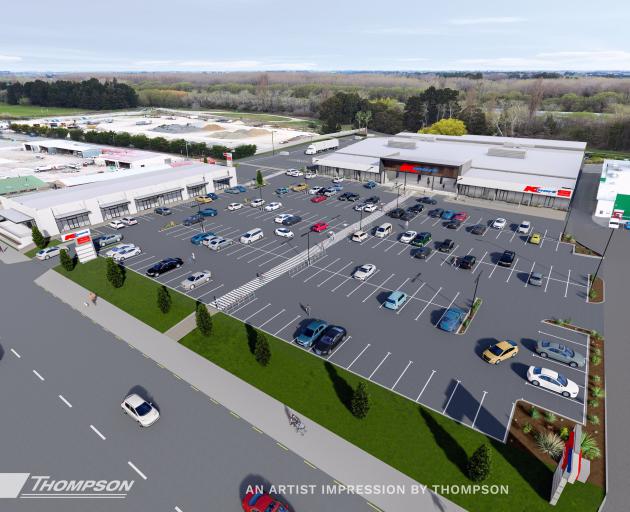 An artist’s impression of the planned new Kmart. Image: Tricroft Properties
Kmart is to open a store in Ashburton, anchoring a new retail and food and beverage complex developed by local property investor Tricroft.

The development will be constructed on the near-vacant site on the corner of Cass and South Sts, next to the Countdown Ashburton South store near the eastern bank of the Ashburton River.

Known as River Crossing, the development will feature a large Kmart along with up to 12 separate food and beverage outlets.

Construction is due to start next year, with the targeted completion date in late 2022.

Tony Gilbert, general manager of Tricroft Properties, said it is exciting for the town and it will broaden the retail options available for residents in the wider Mid Canterbury area.

"We’ve owned this site for a long time and bringing Kmart here is a fantastic outcome that has been about two years in the making," he said.

"We’re delighted to bring a major Australasian retailer to Ashburton, which will grow and diversify the retail options currently available to the town’s residents and visitors.”

Its plans include new stores in regional centres across the country, including Invercargill, Queenstown, Blenheim and Rotorua.

"We want to give more people access to great value on-trend products and one of the ways we do that, is by opening stores in new communities.

"We’ve been exploring potential site locations for some time and think that Ashburton is a great fit for Kmart.

"It’s a strong-performing regional hub with good demographics and it will be a wonderful addition to our New Zealand store network,” he said.

Gilbert said the development is expected to create between 150 and 180 new jobs in Ashburton.

"The Kmart store and the new food outlets will become a significant new employer in Ashburton," Gilbert said.

"We’re also expecting the Kmart store will help assist in the retention of retail spending here.

"Currently, many locals travel to Christchurch or Timaru to go shopping, so we’re hoping that having a Kmart in town will help encourage people to spend their money in Ashburton instead."

A report on Ashburton completed in March by Market Economics found that nearly a third, or 32%, of the total retail spend by Ashburton residents is not spent in Ashburton, with 16% directed to Christchurch and 16% to other locations.

"Kmart and the associated food outlets will add to the choice that is currently on offer for local residents, while increasing business activity at this end of the town centre as well as growing and adding strength to the overall retail offering in Ashburton,” Gilbert said.

The new Kmart will be over 4500sq m. Four of the smaller tenancies will adjoin the Kmart store, with five further tenancies in a separate 900sq m building.

Extensive car parking in front of the retail units and Kmart store will be accessed off both Cass and South Sts.

The new development is located 450m from Ashburton’s central business district. With nearly 24,000 vehicles a day using State Highway 1 near the site, the development is in an attractive location.

"The benefits of this location for food and beverage tenants has already been recognised by the many other businesses which are established nearby, including Burger King, KFC, Pizza Hut, Coupland's Bakery, McDonald's, Pita Pit and two service stations.”

Tricroft has owned the site for about nine years. The name River Crossing is a reference to the history of the site, which was once home to an accommodation house and ferry station.

In 1858 William Turton, generally regarded as the pioneer settler of Ashburton, established a ferry station on the present Kmart site and also built an accommodation house.

By 1864 the coaches of Cobb and Co were using the route through Ashburton in their two-day service between Christchurch and Timaru.

"After years sitting underused, we’re excited that soon this site will once again cater to locals and travellers who will be able to shop and enjoy a great choice of food and refreshments,” Gilbert said.