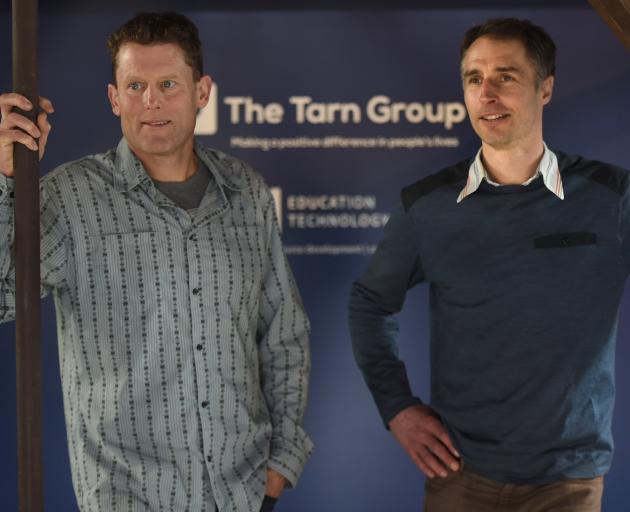 Steve Stanley (left) and James Nation, from The Tarn Group, are excited about the launch of a video software product aimed at the tertiary health sector. Photo: Gregor Richardson
Like the Tarn Group, Steve Stanley has, in a way, come full circle.

Originally from Matamata, Mr Stanley came south to study physical education at the University of Otago.

After stints in Auckland and the United States, he is now living in Tauranga but working for Dunedin-based tech company The Tarn Group, which includes dealing with both the university and Otago Polytechnic.

The Tarn Group has had a soft launch for a new product, being led by Mr Stanley, called Ruru, which is video software for practical assessment aimed at the tertiary health sector.

Over the past few months, the company had been talking to universities and polytechnics throughout the country, and also in Australia, and it was now working on implementing pilot initiatives.

That was exciting from a business perspective but also from the company's perspective as it was going ''full circle'', Mr Nation said.

''The business started out initially focusing on improving the performance of athletes using video software for performance assessment 20-odd years ago. The sport avenue continues, but the interest we are now seeing is this technology being picked up and run with in both the education and corporate sector,'' he said.

The Tarn Group started out as a video analysis company founded in Dunedin by Joe Morrison in 1997, under the name Siliconcoach, while Mr Morrison was doing his master's degree in physical education.

He started selling the analysis to sporting organisations globally before branching into prosthetics and orthotics and also bike and shoe fitting. He then saw an opportunity with online learning.

Mr Stanley completed his physical education degree and did his master's in the late 1980s and early 1990s.

He then worked for AUT doing research and lecturing and, while there, he obtained his physiotherapy qualifications so was in the unusual position of lecturing and studying in the same department at the same time.

In 2004, he moved back to Dunedin as his wife was doing her PhD at the school of physical education and Mr Morrison offered him a job at Siliconcoach.

After a few years, the couple moved to the United States, where he managed a contract for bike manufacturer Specialized. He and his family moved back to New Zealand about three years ago.

The purpose of Ruru was to capture practical skills and analyse them - whether it was a crane driver or someone using a circular saw - anything that could be captured on video.

The first two markets were health education, such as nursing, physiotherapy and occupational therapy, followed by industry.

It had been shown to major medical health institutions in New Zealand, including the University of Otago and Otago Polytechnic, and after trials, hopefully, it would be implemented next year.

As far as technology was concerned, the time was right, as people had good cameras in their phones, there were cloud-based systems and high-speed internet, Mr Stanley said.

It was simple now to take a video on a phone, upload and manage it, whereas when he first went to do a rowing testing session at Lake Karapiro, his car was filled with technology, including a television and VCR; now it would be ''just his pockets'' that were filled up.

Also, people were also used to video now, so it was a way of working that did not exist a few years ago.

Otago Polytechnic was hosting the Australasian Nurse Educators Conference in November and Ruru would be part of the trade display.

While New Zealand and Australia would be the focus over the next six months, the US tertiary market was in the Tarn Group's sights in the long term.