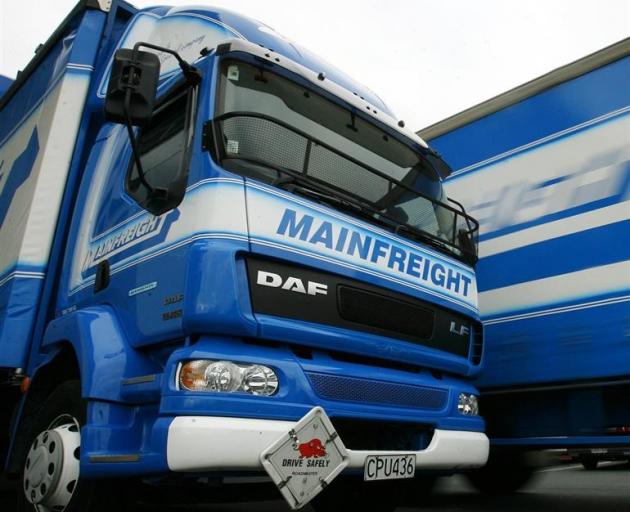 Mainfreight profit rose to an all-time high of $107.9 million. Photo: NZ Herald.
Mainfreight is set to reward its team with its highest-ever bonus payout.

Following a strong result, the company said it would give staff a 7.4 percent increase in their discretionary bonuses to $20.7 million.

Managing director Don Braid said the result provides the company with the confidence to expand to more countries.

"Importantly this growth provides us with the confidence to keep investing in our network and our expansion to more countries," Braid said.

"We expect to continue to extend our global footprint, and where openings arise we will take the opportunity to establish ourselves in more countries."

Profit at the company rose to an all-time high of $107.9 million in the 12 months ended March 31, from $101.5 million a year earlier, the Auckland-based company said in a statement. Sales climbed to $2.6 billion from $2.3 billion.

Asia was the only region to produce disappointing earnings in Mainfreight's latest year, in what it described as a satisfactory performance and "a strong indication of our continuing success in growing a global logistics business".

It said the local transport division faced the most pressure, with congestion at its sites in Auckland, Tauranga, Rotorua, Palmerston North, Wellington, Nelson and Dunedin.

In Australia sales rose 16.6 percent to $624 million and earnings gained 18 percent to $49.9 million. Mainfreight said it was the best-ever result in Australia with all three businesses recording stronger sales growth.

Sales in Asia rose 32 percent to $84 million while earnings dropped 22 percent to $4.9 million. The company was taking a "back to basics" approach in Asia, having made management changes during the year and the region had "seen this decline reduced during the final quarter, and importantly we are seeing an improvement as we head into the new financial year."

In Europe, sales climbed 16 percent to 336 million euros and earnings rose 3.1 percent to 17.7 million euros. "It is likely that ebitda growth will be subdued in the next 12 months, particularly in Logistics, while additional warehousing costs are absorbed and utilisation is improved as customer contracts are realised," the company said.

Revenue in the Americas was little changed at $437 million and earnings rose 3.5 percent to $19.2 million. "We remain confident of the momentum we have in the USA, albeit requiring a great deal of patience while we establish a stronger foothold across all four divisions," it said.

Mainfreight shares last traded at $25.75 and have edged up 1.4 percent this year.