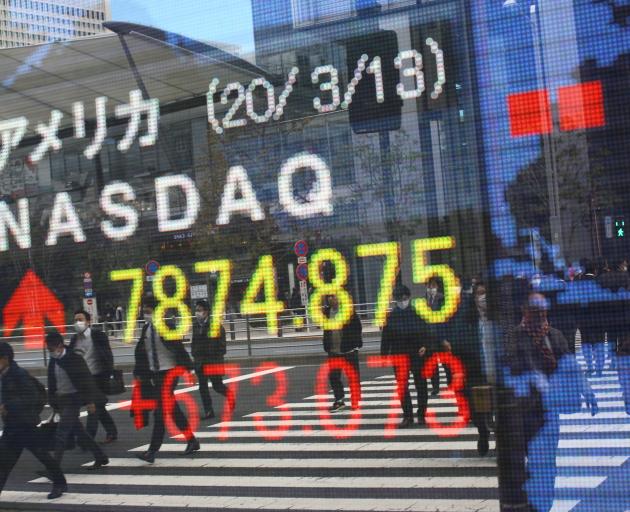 Markets across the world are feeling the effects of the coronavirus pandemic. Photo: Reuters
Markets reeled on Monday, with stocks on Wall Street and the price of Brent crude tumbling more than 10%, as the Federal Reserve's second emergency rate cut in as many weeks failed to calm fears of a coronavirus-induced recession.

New Zealand's sharemarket opened sharply lower for an eight consecutive session on Tuesday at 10am. The benchmark top 50 Index was down 4.3% in early trading.

The magnitude of the US Fed's rate move and other measures on Sunday, backed by global central banks, unnerved investors as the breakneck spread of the outbreak - all but shutting down some countries - outweighed the policy response to ensure liquidity in markets.

The S&P 500 plunged 8% shortly after the open to trigger another automatic 15-minute halt in trading on the three main US stock indexes. The halt was the fourth emergency pause on Wall Street in six days.

Volatility gauges known as fear indexes jumped, with the Euro STOXX 50 in Europe surging almost 28% to an all-time high and the CBOE Market Volatility index soaring more than 30% as equity markets plunged further into bear territory.

Platinum dived nearly 27% to its weakest level since 2002, while gold fell more than 5% as investors unloaded precious metals in exchange for cash as illiquidity haunted the US Treasury market.

Investors worried that the Fed action, joined by central banks in Japan, Australia, New Zealand and elsewhere, may not be enough for companies facing a sharp slide in demand. The moves were reminiscent of the sweeping steps taken more than a decade ago to staunch a meltdown of the global financial system

"The central banks threw the kitchen sink at it yesterday evening, yet here we are (with deep falls in stock markets)," said Societe Generale strategist Kit Juckes.

"There is a great sense that central banks are going to get to grips with the issues of getting money flowing," Juckes said. "But the human problem, the macro problem, there is nothing they can do about that."

Almost nothing was left unscathed. Oil, already slammed by a price war, slumped to less than $US30 a barrel in early trading to lows last seen in early 2016.

There were moves in Europe to curb short-selling of stocks as bond markets tried to juggle both the risk to vulnerable countries but also a fiscal spending splurge might impact safe-haven debt.

The Fed's emergency 100 basis-point rate cut on Sunday was matched by the renewal of its quantitative easing program to increase cash in markets and more cheap U.S. dollar funding to ease a ruinous logjam in global lending markets.

There was further policy easing on Monday from the Bank of Japan in the form of a pledge to ramp up purchases of exchange-traded funds and other risky assets.

New Zealand's central bank cut rates 75 basis points to 0.25%, while the Reserve Bank of Australia pumped more money into its financial system. South Korea and Kuwait both lowered rates, while Russia and Germany were throwing together multi-billion dollar anti-crisis funds.

MSCI's index of Asia-Pacific shares outside Japan tumbled 5.2% to lows not seen since early 2017, while the Nikkei fell 2.5% as the BoJ's easing steps failed to reassure markets.

Chinese data underscored just how much economic damage the disease has already done to the world's second-largest economy, with official numbers showing the worst drops in activity on record. Industrial output plunged 13.5% and retail sales 20.5%.

In Asia, Shanghai blue chips fell 4.3% overnight even as China's central bank surprised with a fresh round of liquidity injections to the financial system. Hong Kong's Hang Seng index tumbled 4%.

Wall Street's worries were raised after New York and Los Angeles both ordered bars, restaurants, theatres and cinemas to shut to combat the spread of the coronavirus, mirroring similar measures in Asia and Europe.

Markets have been severely strained as bankers, companies and individual investors stampede into cash and safe-haven assets while selling profitable positions to raise money to cover losses in savaged equities.

The Japanese yen strengthened 2.04% versus the greenback at 105.79 per dollar,