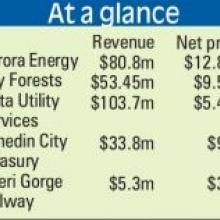 However, the reported profit for the year was dragged down by higher tax in the period and the need for the company to take a $2.6 million loss on the sale of Citibus during the period.

The reported profit was $16.2 million compared with $18.1 million in the pcp. The profit from continuing operations was up slightly at $18.85 million from $18.5 million.

With the removal of the continually loss-making Citibus, City Holdings will be able to produce a much cleaner balance sheet in the future.

Also noticeable this year was a much lower growth in value of the council-owned forests: $700,000 compared with $6.2 million last year.

Chairman Paul Hudson said the directors were satisfied with the results of the core businesses. Forestry returns, both from the point of view of operations and carbon-credit receipts, had been a record for City Forests, and Delta Utility Services had undergone solid growth.

Overall, the revenue of the group increased 9.4% to $245.8 million, and Delta Utility Services was again the star with revenue increasing by 19% to $103.7 million.

The after-tax profit from City Forests improved from $7.1 million to $9.5 million.

"We had a large improvement in log prices, caused by high demand for resources with Asia, and strong sales of carbon credits."

Dunedin International Airport will report next week but Mr Hudson said the profit was higher than budgeted. Total international passenger movements through the airport had increased, but domestic numbers were slightly down.

Looking ahead, Mr Hudson said the world continued trying to recover from the global financial crisis, but the path to recovery looked different from the normal way back from major recessions.

Those who had chosen to live in excess of their means were affecting those who were showing strong signs of economic growth.

"Our proximity to Asia has hugely assisted Australia to lessen the impact on the New Zealand economy, but the strength in commodity prices, reflected very positively this year in the group result, is by no means guaranteed to continue."