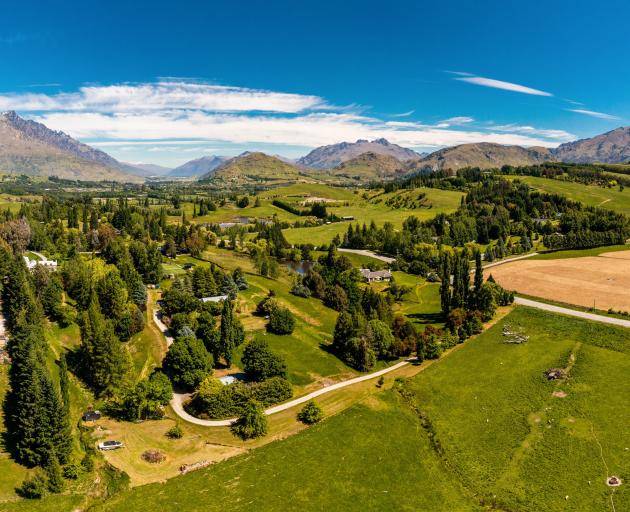 An aerial view of a Hunter Rd property in the Wakatipu Basin which has gone on the market for the first time in nearly 50 years. PHOTO: SUPPLIED
Otago has broken through the million-dollar level for the median price for lifestyle blocks.

The median price for all lifestyle properties sold in the three months to November was $1,010,000 and was $210,000 higher than the three months ended November 2020. Otago proved resilient with a strong 20% lift in sales, while Southland had a solid performance for volume and prices.

REINZ rural spokesman Brian Peacocke said the sales data was a "meritorious effort" for the country given the constraints imposed by Covid-19 restrictions and the incremental increase in interest rates now emerging.

"Perhaps property purchases are the panacea for postponed travel propositions," he said.

Meanwhile, a rural block which has gone on the market in Queenstown’s Wakatipu Basin has been described by long-time real estate agent Simon Hayes, of Harcourts, as "the best small rural block ever seen".

The Hunter Rd property was bought by lawyer Brian Bayley and his wife, Pauline, in 1973 after Mrs Bayley suggested the young family should get their own holiday house.

Forty-nine years later, and with many happy family memories, the family was leaving behind the cottage they still loved, a pond fringed by water lilies and hundreds of well-established trees.

“We’re octogenarians now and the children live too far away to use it as a holiday home, so the time has come. The decision to sell isn’t painless, but it’s practical. We’re sure someone will love it as much as we have. It’s a special place,” Mr Bayley said.

Otago and Southland recorded a rise in the number of farm sales for the three months ended November, compared with the corresponding period last year, up 15 and four sales respectively.

Nationally, there were 85 fewer farm sales for that period. The median price per hectare for all farms sold in the three months to November was $37,710 compared with $27,740 for the three months ended November 2020.

The strong rise in sales volumes and values confirmed the strength and resilience of the agricultural sector, Mr Peacocke said.

Otago’s farm sales were described as "vigorous results for a vigorous province" with a good range of sales of dairy support, dairy and finishing units in the Waitaki district, pursued strongly by Central Otago where finishing and grazing unit sales were dominated by the horticulture sector, the highlight being "a very strong sale" of a cherry orchard.

While Queenstown Lakes registered on the finishing front, Clutha was the dominant factor for the province with a full range of sales of dairy, dairy support, arable, finishing and grazing properties.

In Southland, strong finishing sales dominated, backed up by good results on dairy units, grazing blocks and, unusually, sales of a deer unit and a grass-harvesting property.