Other people's time on her hands 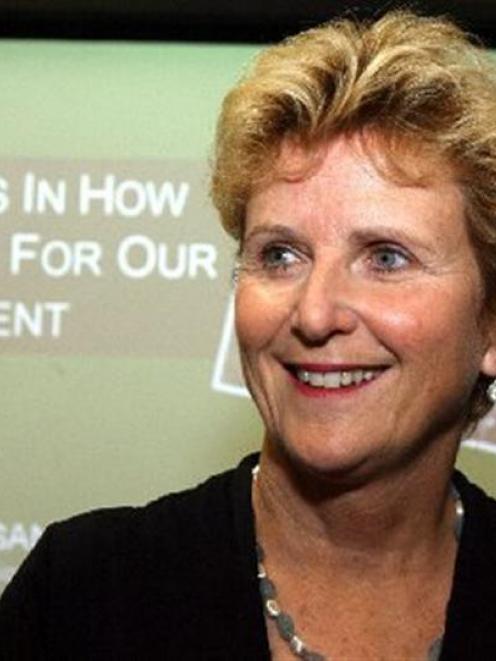 When she has spare time, Diana Crossan enjoys travelling and playing tennis.
Getting financially sorted is something in the back of the mind for most New Zealanders but Retirement Commissioner Diana Crossan lives and breathes it, for at least three and-a-half days every week.

Ms Crossan, in her fifth year as commissioner, says it was never a career move she could have predicted but is one she definitely enjoys.

She started her career as a probation officer and has worked in a variety of public sector and private positions.

She was working in the not-for-profit sector on a project aimed at helping families deal with the cost of tertiary education when she was approached by then Education Minister Steve Maharey.

Her first reaction was: "How can I possibly do that and this job?'' But Maharey countered that it was only part-time and Ms Crossan was swung round.

A lot of her time is spent coming up with ideas and, with her team of eight people, convincing the Government, private sector and ultimately individuals to change their ways.

"Before I came along, they made two major moves - they moved away from talking about retirement and moved on to the Internet.''

Research showed people did not respond well to the word "retirement'' and that it was better to talk about "lifetime'' - the different stages that people go through, such as saving for a house, paying for the costs of children and managing money in retirement.

The shift to the Internet was made in 1999 and was a big step for the commission.

In her first full year in the job, Ms Crossan began focusing on getting financial education into schools.

The first trials were held in 2006 and this year the commission plans to tender for the education of teachers and start teaching the programme in schools in the second half of the year.

The other area where Ms Crossan feels she has made a breakthrough has been in policy direction for the commission.

"There are three parts to this. The country needs stable effective policy, trusted financial advice and a financially educated population. Everything the commission does fits into those three areas.''

While it is slow going, Ms Crossan says she has noticed a change in her five years in the job.

"I think there is far more discussion about it.''

The commission is now also invited to take part in a lot more financial education programmes. But it is still early days.

At the end of last year, the commission launched its draft national strategy for financial education. It is about to hold workshops in Auckland for it.

The strategy is not just about getting financial education into schools but into the workplace. It has had more than 30 submissions and feedback from the public since launch.

"We are looking at how we can work with all New Zealanders, from 5 to 95,'' she says. Ms Crossan does not have any qualifications in finance or education.

"I enrolled in stage three economics at Victoria University, I went for a couple of lectures but then decided I don't need this in my life.''

Her big learning curve in financial education came when she started working for AMP in 1997. "I am not that interested in money. I was really surprised at how people in the finance sector think people are obsessed with money.''

In 2000, she moved to London to lead AMP's distribution strategy. She says it gave her some quick lessons, especially as her first job was to take the AMP's adviser force into the 21st century.

Why did Ms Crossan take on the role of retirement commissioner?

It certainly wasn't for the money. She says she took a significant pay drop when she moved into the public sector.

The position did have the benefit of being part-time, a situation which allowed her to carry on with several other not-for-profit roles. But she plays down her desire to do it for a greater good.

"Financial education is important. Making a difference - we all find a way to make a difference.''

The next steps for the commission are developing the strengths it already has, getting financial education into a lot more places and working with the financial sector on the issue of trust.

She says the current environment is the result of deregulation in the late 1980s and is not just the finance sector.

"New Zealand had this radical change in the late '80s, where they said 'we are going to deregulate everything'. It went completely the other way. The financial sector went along with that.''

When not being the retirement commissioner, Ms Crossan has her hands full. Last year, she completed a six-year term on the board of New Zealand Post and in December she joined the board of Mighty River Power.

She is also the chairwoman of Whi Rawa, Ngai Tahu's savings scheme. It has 13,500 members, who save money and have some of their contributions matched by Ngai Tahu. She is also on the board of Refugee Services - a not-for profit organisation - and Wellington's regional strategy group.

In her spare time, Ms Crossan enjoys playing tennis and socialising with friends. She recently walked the Milford Track and likes to travel.

New Zealand has one of the highest levels of over-55s still in the workforce in the Western world. Ms Crossan says this is partly because we do not have any laws which state that people have to retire at a certain age. It is also down to the fact that people can still work and receive New Zealand Super.

As for her own retirement, Ms Crossan says it is a long way off.

"I can't imagine retiring. I will probably just change the way I work and spend more time at the beach and travelling.''