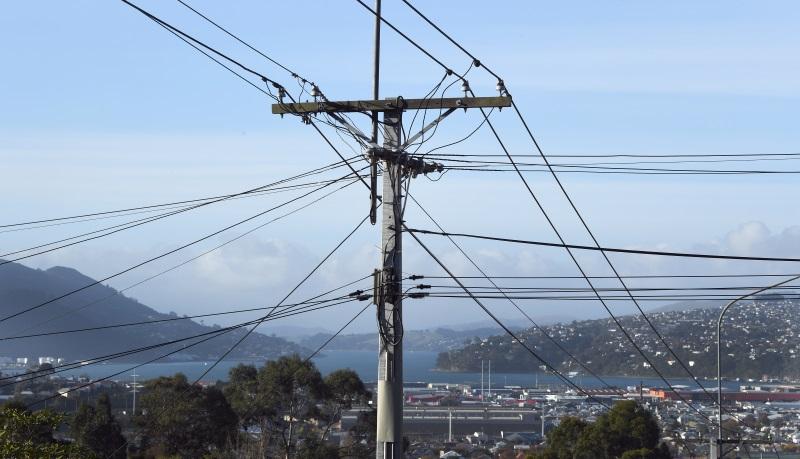 Aurora owns and operates the poles, lines, and other equipment that distributes electricity from Transpower’s national grid to homes, farms, and businesses in Dunedin, Central Otago, and the Queenstown Lakes district. Photo: ODT files
Power bills are on the way up for more than 90,000 southern consumers.

The Commerce Commission has this morning released its final decision in response to Aurora's proposal to fix its electricity lines network in Dunedin, Central Otago and Queenstown Lakes.

In June 2020, Aurora applied for a customised price-quality path (CPP) in which it forecast it would need $609 million over five years to replace failing infrastructure and run its network.

Aurora owns and operates the poles, lines, and other equipment that distributes electricity from Transpower’s national grid to homes, farms, and businesses in Dunedin, Central Otago, and the Queenstown Lakes district.

After closely scrutinising Aurora’s proposal, the Commission has decided it has made the case that significant investment is needed to make its network safer and more reliable.

The Commission has allowed it to recover a maximum spend of $563 million over five years - $46 million less than Aurora’s original proposal.

Overall, the Commission had approved more expenditure than was proposed in its draft decision, Associate Commissioner John Crawford said.

This was largely as a result of further analysis of evidence provided by Aurora that made the case that the spending was justified.

“We have not approved some aspects of the proposal that we consider were not justified or necessary in the next five years.”

Mr Crawford said taken together, the package was focused on the long-term benefits to consumers.

"Aurora must now deliver on its proposal.

“Aurora’s historic under-investment has led to the performance of its network deteriorating. Without this investment, its network will continue to deteriorate, safety incidents will increase, and its customers will experience more frequent and longer outages."

The commission recognised the depth of feeling held by consumers about the position Aurora was in, and the impact on bills this extra spending would have, particularly entering winter, Mr Crawford said.

While the commission's decision substantially reduced the increase in lines charges compared to what Aurora proposed, it was conscious the impact on electricity bills would still be significant.

Aurora's line charges make up about a quarter of the average household's electricity bill.

To help mitigate the impact of increased bills it had capped Aurora’s annual revenue increases at about 10% per year.

Revenue that was deferred as a result of the cap would need to be recovered from 2026 onwards.

Aurora had already announced new line charge increases that came into effect from April 1 this year, with prices expected to rise by between $4 and $10 per month for the standard residential customer, depending on usage and where they live.

While there were a number of variables that made it difficult to provide estimates for years further into the future, the Commission estimated that monthly lines charges for residential customers would increase by between $32 to $51 by 2026, depending on where they lived.

The Commission also released for consultation its draft decision on additional reporting measures designed to improve the ability of customers to hold Aurora to account.

These would require Aurora to publish a yearly report on its progress on delivering the investment plan, present this report to customers directly, and report more clearly on service quality and regional pricing issues.

“We heard from Aurora’s customers their lack of confidence in Aurora’s ability to deliver on its plans. These measures aim to address that, but we also expect Aurora to improve its relationship and engagement with the communities it works in and for.

“We would like to thank the many customers and stakeholders who have engaged with us throughout this process. Their feedback has been valuable and important to shaping our decision. It has taken many years for the issues on Aurora’s network to materialise, and it will take some years to fix,” Mr Crawford said.

Dr Fletcher was pleased the company had been afforded more latitude in capital and operating expenditure than the commission had signalled in its draft decision.

The company's case was credible and had been heard, he said.

Aurora could now "get on and deliver our plan that has been well thought through, and will allow us to deliver our services to consumers safely and efficiently".

Price increases for this year were announced in March and there would not be further increases this year in annual lines charges.

Am on a disability benefit after a stroke . I already ration things like hot water and heat . Due to Auroras mismanagement these increases may very well result in me using neither and there are people worse off than me.

The question is, why Aurora Energy has not been able to spend money on upgrades and maintenance yet requires a government bail out which includes a fees hike for customers.

You'll have to put that question to the councilors who were in office from the mid 2000's onward Mu.

So, Aurora, a DCC company, is going to hike it's fees. DCC is going to hike rates and also foist a change in rubbish collection that will also cost extra. I hope people remember this for their submission on the 10 year plan.

At least those of us in Dunedin have had the benefit of the higher dividends made possible by Aurora's incompetence — imagine how those in Central and QTown must feel.

Aurora executives and directors from the last 20 years should be pursued, preferably financially, but failing that for a spell in the public stocks.