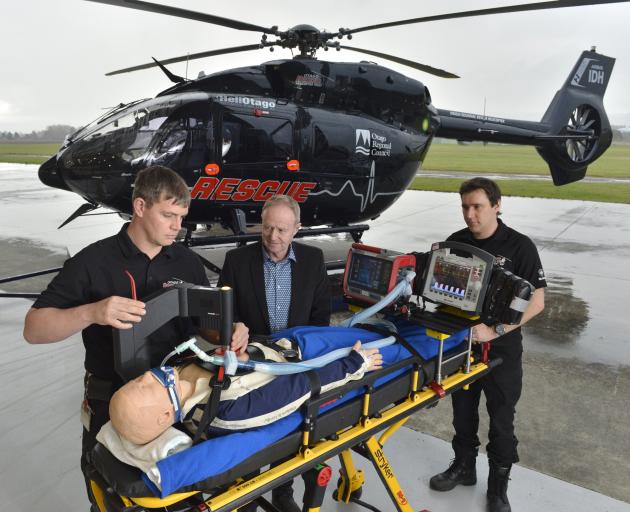 HeliOtago says it transported 1200 patients in the year to June 2019, with almost 2000 helicopter hours flown during accident, emergency or search and rescue missions

This compared with 1688 hours in the prior year.

Of those, 836 hours were related to accidents, 745 hours were spent flying for medical emergencies and 359 were spent transferring patients between hospitals.

Search and rescue hours were well down, at 57 hours compared with 105 the prior year.

The rescue stats included those from Queenstown from November for the first time.

In its report for the year to June, HeliOtago said there had been significant enhancements to the rescue helicopter service, which now included three dedicated aircraft in Dunedin and one in Queenstown, all with dedicated flight crews and paramedics on a 24/7 basis.

During the year much of the on-board medical equipment had been replaced and upgraded, while new GPS routes had also been developed for enhanced safety, providing better ability to fly in poor weather conditions.

Otago Rescue Helicopter Trust chairman Martin Dippie said the trust had received total donations of $822,000 during the year, including an ongoing commitment of $350,000 from the Otago Regional Council and $110,000 from the Otago Motor Club Trust, which went towards the replacement of medical equipment carried by the helicopters.

The new model for the South's air ambulance had provided an enhanced air service, he said.

''From 1 November 2018, the Ministry of Health and ACC contract to provide rescue helicopter services across the South Island had been held by Helicopter Emergency Medical Services NZ (HEMS), a joint venture between Helicopters Otago and GCH Aviation in Christchurch.

''Under the contract HeliOtago continues to deliver its stunning service in the lower South, now also incorporating the Queenstown Lakes area that is also supported by the Lakes District Air Rescue Trust.''

Mr Dippie said the contract with HEMS had now been confirmed until October 2022, which would provide the community with certainty of ongoing, highly professional and capable rescue service.