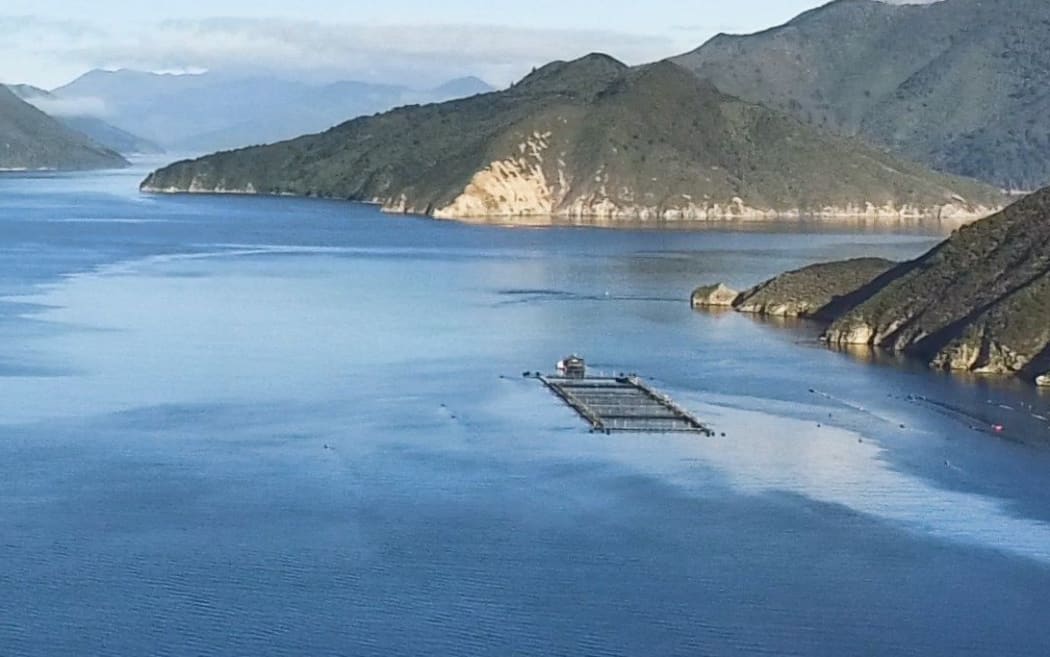 Photo: Supplied / NZ King Salmon
The country's largest salmon producer says it is being forced to close farms and let go of staff due to warmer water temperatures brought on by climate change.

New Zealand King Salmon will fallow three farms in the Pelorus Sound in Marlborough by next summer, with one kept to run trials.

It comes after a summer blighted by unusually high fish mortalities.

Between December and February, trucks from Havelock and Picton made 160 trips to the Blenheim landfill, dumping 1269 tonnes of dead fish and waste.

New Zealand King Salmon chief executive officer Grant Rosewarne said while the Pelorus sites were suitable for nine months of the year, they were now too warm to farm through summer.

"What we've tried to do in the past is develop better technology, better practices, better ways of farming the fish to lower their stress so that they can tolerate the temperatures and get through the summer, but we've now come to the view that there's no amount of that, that's successful, so the prudent thing then is to is just to avoid the summer."

Rosewarne said it was the first time the company had had to close farms due to rising sea temperatures as a result of climate change.

"I've often said we're a bit like the canary in the coal mine, when it comes to global warming, we've got a cold water species that's very susceptible to half a degree change or one degree change. That's what we're seeing in the Pelorus and we're very much hoping to work with the government, for them to mitigate climate change as they have committed to do."

While the closures would reduce the harvest volume, Rosewarne said the lower mortality costs would provide for a more stable, predictable operation.

The Pelorus farm closures would result in a forecast decline in production in the 2023 and 2024 financial years to 5,700 and 6,500 tonnes respectively, with a 200 tonne increase predicted for 2025.

Rosewarne said the closures would also result in redundancies, with around 120 positions affected - it had already lost around 59 staff due to natural attrition and another 60 positions were still to go.

The situation was a "real tragedy" for the company and its people and could have been avoided if the company had enough cool water space for farming, he said.

The outcome of New Zealand King Salmon's application to build an open ocean farm in the Cook Strait - called Blue Endeavour - is expected in September.

Rosewarne said the company was optimistic about the future and had signed up to the government's aquaculture strategy to sustainably grow the industry in New Zealand.

"We think the aquaculture industry could become New Zealand's most valuable industry and the greenest primary sector at the same time if we were supported."

The three Pelorus Sound farms will be decommissioned and the nets removed before next summer, but the pens will remain to be used as nurseries if the Blue Endeavour application is successful.