Driverless cars still some way off 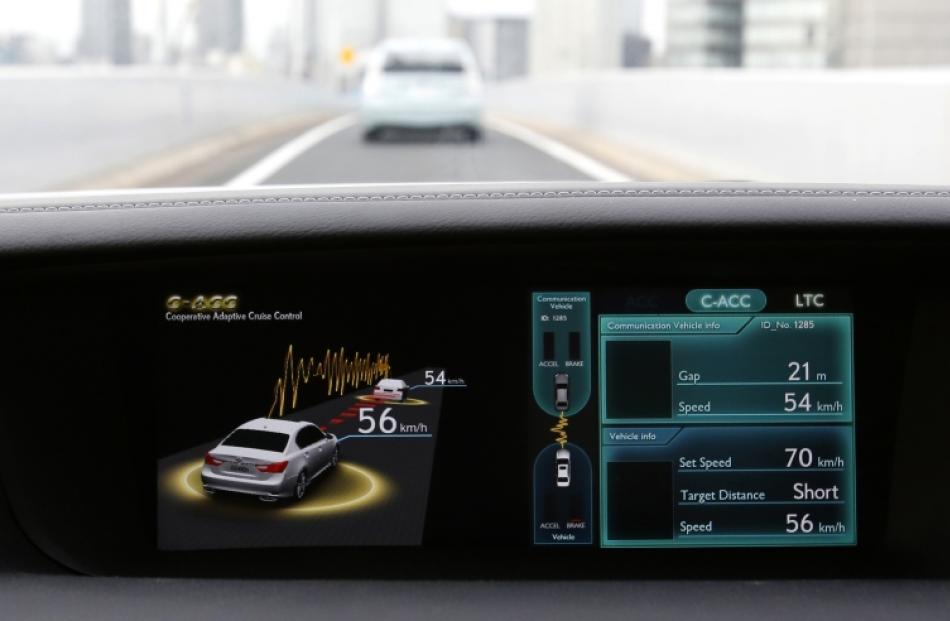 A display on a Toyota test car shows the Co-operative-adaptive Cruise Control, which uses 700-Mhz band vehicle to vehicle ITS to transmit acceleration and deceleration data to maintain inter-vehicle distance during the Toyota Advanced Technologies...

When General Motors vice-chairman Steve Girsky slid into a Cadillac SRX luxury crossover vehicle specially equipped to drive itself, his reaction echoed that of many consumers as more self-driving technologies are rolled out.

"It's a little unsettling at first when you take your hands off the wheel and then it's one of these 'Oh wow' moments," Girsky said in a September 27 interview about the vehicle he test drove over a year ago.

While consumers may envision a George Jetson-like future where cars steer themselves as "drivers" read iPads, that reality is still years away for mass production cars.

What most automakers and suppliers see near term is cars equipped with "driver assistance" features that help in unsafe conditions, prevent accidents and take a lot of the stress out of driving.

These features will be stepping stones towards a fully- driverless car.

One of the first situations mass-production cars can handle without a driver is bumper-to-bumper traffic. Some cars are already equipped to steer themselves into a parking space. Others warn drivers if they are over the speed limit and brake the vehicle automatically to avoid a collision.

Companies are spending hundreds of millions of dollars to keep up with consumers' demand for such technology. Get it right and car buyers will pay thousands of dollars for the added features, analysts said.

"If automakers build it and can explain the value proposition, consumers will come," said Gary Silberg, national auto industry leader for consulting firm KPMG, which released a study about consumer attitudes toward self-driving cars.

KPMG found most Americans surveyed were receptive to the idea of a driverless car. The results raised red flags for the auto industry as consumers ranked Google, which has a self-driving car program, and Apple as brands they would trust most for such vehicles.

While that raises the question whether tech companies could become industry rivals, Girsky and other executives said automakers were just as likely to partner with tech companies as compete with them.

The KPMG report was in line with global studies that show a growing number of people are receptive to the idea of self-driving cars.

In North America, US technology research firm ABI Research sees the first fully driverless vehicles appearing at the beginning of the next decade and reaching more than 10 million shipping annually in 2032.

"It's moving faster than even I imagined," said Larry Burns, GM's former research chief and an advisor to Google, which expects to release its driverless technology in the next five years.

"Every board of every major auto company needs to be asking their leadership, 'What are you doing about this whole phenomenon?'"

Among the latest automakers to make predictions were Nissan Motor Co and Mercedes parent Daimler AG, which both said they plan to start selling self-driving cars by 2020.

Elon Musk, electric carmaker Tesla Motors Inc's billionaire chief executive, sees autonomous cars handling 90 percent of the driving within three years. However, he said the idea of building a car that controls itself under all circumstances was too ambitious.

GM believes semi-autonomous cars will be available later this decade, but fully self-driving cars are much further out. In his test drive, Vice Chairman Girsky got a taste of a feature dubbed "Super Cruise" that is capable of fully automatic steering, braking and speed control in certain highway driving.

KPMG, which previously forecast self-driving cars hitting dealers in 2019 with a more developed infrastructure in 2025, found consumer interest jumped significantly if the car included the ability to turn that technology on or off, and it meant significantly lower commute times due to dedicated highway lanes. Those surveyed were willing to pay a premium of about 15 percent, or almost $US4000 on a $US25,000 vehicle equipped with such technology.

Some executives say automakers are held to a higher standard for their technology than other companies.

"The consumer will accept that Siri on the iPhone works half the time, but if you put something in the car they want it to work 100 percent of the time," said Delphi Automotive Chief Technology Officer Jeff Owens. "That is the dichotomy we're facing."

With liability issues to iron out - no automaker wants to be blamed for a driverless car accident - auto executives said no car in the near term will be fully self driving. In other words, the consumer will be sitting in the driver seat, ready to take over.

"We don't want people to think that it's OK to drink and drive, or read papers while driving," Toru Futami, Nissan's engineering director of advanced technology and research said last week. "Ultimately, the responsibility lies with the driver."

Another finding in the KPMG study should scare auto executives: engines, transmissions and styling ranked at the bottom of the list of things that most mattered in a self-driving car.

With car performance and quality becoming almost uniform across auto brands, driver assistance technology has become a factor that can make one vehicle stand out from another.

As this moves forward, and cars become loaded with driver assistance technology, it remains to be seen whether outside players like Google and Apple could directly compete with automakers on driverless cars.

Ford Motor Co Chairman Bill Ford worries about the impact on car manufacturers if consumers love the technology in the vehicles more than the vehicles themselves.

"As we've added more and more convenience and cool stuff in cars, we've taken away their ability to love the car," he said in June 2012. "There's no turning back the clock and that's where we're going and that's where we should be going, but it's one aspect that I actually feel a little sorry about."