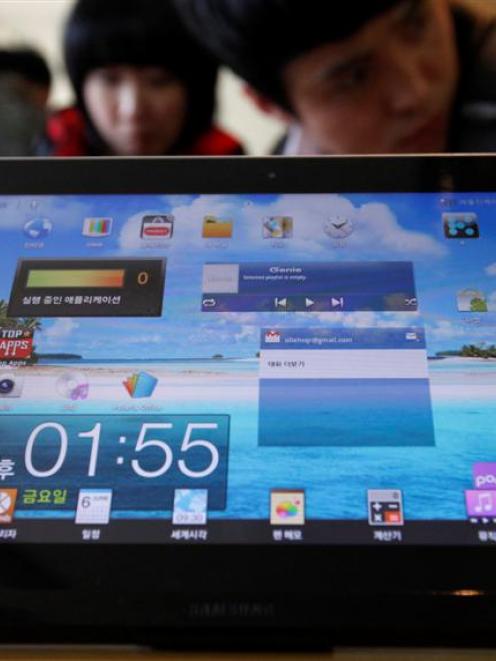 The Samsung Galaxy Tab is displayed at a store in Seoul. REUTERS/Kim Hong-Ji/Files
Tablets with paper-thin screens that can be folded and tucked into your back pocket, artificial intelligence and augmented reality - the stuff of science fiction may be coming to a store near you.

It's been two years since Apple launched the iPad and spawned rival tablets from the likes of Samsung, Amazon Sony, and now Google Inc and Microsoft Corp.

Much of the competition so far has centered on making smartphone and tablets lighter, slimmer, faster and longer-running than their predecessors, and the trend shows no signs of slowing. The increasingly crowded marketplace is also galvanising hardware designers and software engineers to explore new technologies that may revolutionise the look and feel of mobile devices in coming years.

"We should think beyond just the touch-screen device," said Lin Zhong, a professor at Rice University who does research on mobile systems. "Why do we have to hold tablets, carry many displays? We should think about wearable computers."

Some researchers are experimenting with wearable devices, such as Google Glass, a stamp-sized electronic screen mounted on eyeglass frames to record video, access email and surf the Web.

Others, like Microsoft, are investigating the use of 3-D cameras to create images that pop up when a person calls. Samsung has a concept video that shows a bendable, transparent 3-D smartphone-hybrid tablet that can also be used as a real-time interpreter.

Few of these new technologies will hit store shelves any time soon - companies and researchers are more actively working on touchscreen innovations in the near term.

In particular, organic-light-emitting diodes, or OLED, is widely touted as the successor to liquid crystal displays. OLED displays, such as in Samsung's Galaxy Note smartphone, are lighter, thinner and tougher than current displays.

The main attraction of OLED at first are their ruggedness, but the technology could one day allow tablets to be folded or rolled up like a newspaper. Reaching that point poses challenges like making the delicate chips and components inside them more flexible and resistant to damage.

"Flexible and foldable displays will first be implemented on smaller sizes like smartphones," said Rhoda Alexander, IHS iSuppli's tablet analyst. "Tablets may follow in a later progression, once manufacturing costs and yields have been tested."

An unfolding NewSSlate concept developed by Innovation+Bermer Labs shows a foldable tablet that one can use to read news and watch videos. These are not expected to be ready for prime time for another few years.

NEXT UP: WRAPAROUND GLASS

Apart from experimenting with various materials in their own labs, manufacturers are partnering with premier academic institutions in their quest for the most interactive screens. Samsung is working with Stanford University's chemical engineering department, and Microsoft is working with Rice University.

Professor Zhenan Bao's team at Stanford has developed stretchable, super-sensitive and solar-powered "electronic skin," or sensors that can feel a touch as light as that of a fly. One of its obvious applications is in touchscreens, and Bao said the research has generated a lot of inquiries from companies.

"Right now there is a lot of interest in having sensors in the screen that can have pressure input for the touchscreen," Bao said. "Companies are also basically looking for replacement material for the current silicon that is cheaper and compatible with plastic substrate but has the same performance level."

Specialty glass company Corning Inc, famous for its "gorilla glass" used in Apple devices, has an ultra-slim flexible glass called "willow glass" that has the potential to enable displays to be wrapped around a device. Corning said it is currently shipping samples of willow glass, which is compatible with OLED displays, to companies.

Each new generation of tablets boasts big improvements in pixel density and image quality, making photos, games and movies more life-like. Manufacturers and software designers have made less progress finding ways to let computers give physical, tactile feedback - but they're working on it.

The stakes are high as tablets become more and more integrated with smartphones and other devices at home. Betting on the right technology and features is imperative, since the still-new category has already claimed many victims, including Hewlett Packard's Touchpad tablet that was killed last year after only a few months on the market.

With many companies entering the fray, vying to take share away from Apple's iPad, those who get it right may end up influencing the way people communicate and consume all media.

For now, size and price is where most manufacturers are competing as they try to break the dominance of Apple in the tablet market. Six out of 10 tablets sold are iPads.

"The big open area that is left to tackle is truly great input," said Tony Fadell, co-founder and chief executive officer of Nest Thermostat, who previously led the team at Apple that created 18 generations of iPods and three generations of the iPhone.

"There is tactile input as well as voice input. Those are the two inputs that still need to be addressed in tablets," Fadell said.

In a recent patent application related to tactile, or haptic, technology, Apple in May outlined how features could be added to a screen that would make it possible to alter the feel of its surface.

IBM Fellow Bernie Meyerson expects major breakthroughs in artificial intelligence in the next several years. He envisions people having real, spoken conversations with their devices, which will boast technology much more advanced than IBM's Watson computer that defeated two champions on the Jeopardy gameshow last year.

"You hand it to your grandmother and it just works. It will adapt, tune itself to your voice," Meyerson said. "You'll have something that you carry around in your pocket and it listens to you when you want it to."

Laser projection keyboard devices that connect to mobile devices by Bluetooth are already available, although some say the technology is still buggy. In June, Microsoft unveiled its Surface tablet, with a 10.6 inch display and a protective cover that doubles as a keyboard.

Other new and upcoming improvements in tablet hardware are seen as attractive but less important differentiators. At an industry event in Madrid earlier this year, manufacturers dunked tablets and smartphones in aquariums to show off new waterproof coatings.

Intel Corp recently showed off "ultrabook" laptops with screens that swivel from their keyboards or detach completely to act as tablets.